While the Creta is already a high-selling model for Hyundai worldwide, this 7-seat iteration will invite a larger set of audience which demands more seating.
By : Prashant Singh
| Updated on: 03 Apr 2020, 05:02 PM 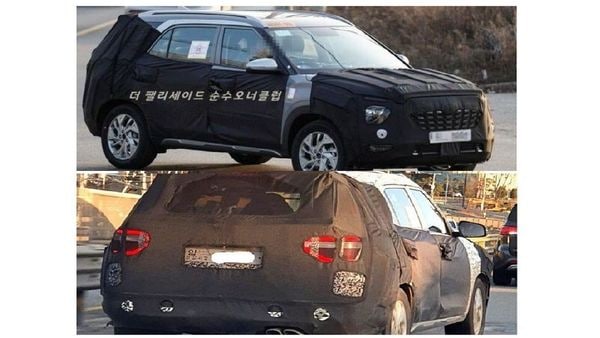 The Hyundai Creta 7-seat is in the pipeline and it was spotted doing rounds on the public roads a few days back. While the Creta is already a high-selling model for Hyundai worldwide, this 7-seat iteration will invite a larger set of audience which demands more seating.

As the spy images suggest, the 7-seat Creta will sport a similar design but along with some significant styling and structural changes. At the front, it will feature a unique, chrome-studded radiator grille, similar to what's seen on the Kia Carnival's snout. Also the prototype was seen with front parking sensors which aren't found on its regular 5-seat model. Apart from a unique grille, expect a completely new front bumper to complement its looks.

Over the sides, the 17-inch Clean Silver alloy wheels, however, remain the same. But the use of unique silver-coloured side plates underlining its body baseline is a welcoming addition. Its windows use generous amount of chrome treatment on the upper-side and this chrome slat extends till its C-pillar. It also gets a large sized quarter-glass which provides an outside view to the last-row passengers. This model also features new roof rails, while the roof line looks rather flattish for extended headroom.

Coming over to the rear, it gets a slightly conventional looking tail-section with a mildly raked rear quarter glass. Also, the tailgate has been given a more upright design which should be good enough to make space for the third-row passengers. The tweaked LED tail lamps design will also be another significant change. The SUV may get the reflective strip at the centre as on the current model, but its not confirmed yet.

As the looks suggest, the 7-seat version may be slightly longer in length. What's certain is that its rear-overhang will be stretched to accommodate more interior space. But it remains to be seen if it uses the same wheelbase as the original model. Speaking of which, the 5-seat Creta features a 2,610 mm wheelbase. It measures 4,300 mm in length, 1,790 mm in width and 1,635 mm in height (along with roof rails). Since the third-row will occupy most of the space at the back, the boot capacity may not be as much as 433-litres, like the regular Creta.

As for the mechanicals, the Indian-spec model will most probably use the same powertrain options as the Creta 2020 which include a 1.5L naturally aspirated petrol, 1.4L turbocharged petrol, and 1.5L turbocharged diesel engine. A 6-speed MT, 7-speed DCT, CVT and 6-speed AT unit may be the transmission options. The power will be transmitted to the front axle and AWD will not be included, at least not in the Indian-spec model.

It will be a direct rival to the likes of Tata Gravitas and the MG Hector Plus.