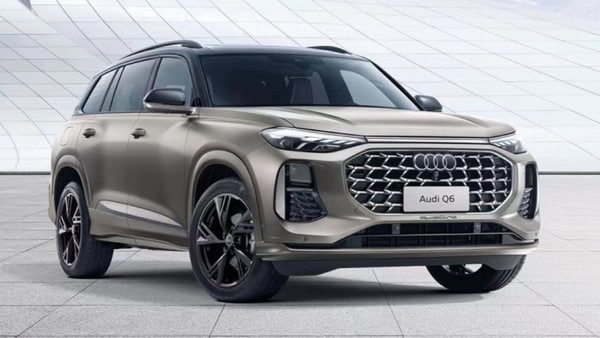 2023 Audi Q6 facelift is the biggest SUV launched by the German auto giant in China.

Audi has launched the 2023 Q6 SUV in China. Based on the MQB Evo platform, the Q6 is the largest SUV launched by the German carmaker in world's biggest car market. The 2023 Q6 comes with a fourth generation EA888 EVO4 engine, which can generate maximum power between 231 hp and 265 hp. The new Q6, which Audi calls the ‘flagship Roadjet land plane’, is the German carmaker's third model after the Q5 e-Tron and A7L.

The 2023 Audi Q6 SUV will be offered in four trims; the 40TFSI Quattro cloud viewing type, 45TFSI Quattro Qiyun, 50TFSI Quattro cloud type, and the 50 TFSI quattro Lingyun Edition First Release Limited. It stands longer than five metres, 2,014 mm wide, 1,784 mm high and has a wheelbase of 2,980 mm. The SUV is offered with a choice of 19-inch, 20-inch and 21-inch alloy wheels.

The exterior design of the 2023 Audi Q6 is inspired by a Chinese fictional beast called Kirin. The blacked-out treatment of details such as the front face, rearview mirror and roof of the Flying Ride version gives more attention to the sport. The grille of the new Q6 adopts Audi's iconic octagonal grille design, and the honeycomb-shaped grille enhances the front face. The LED light strip design is also used for the first time on Audi models. Combined with the LED headlight units on both sides.

At the rear, the Audi Q6 adopts a relatively wide taillight design, which echoes the front face. In addition, the shape of the rear adopts a double layer design and comes with a hidden exhaust layout. It's worth noting that the SAIC Audi Q6 adopts Audi's new lighting scheme. In addition to the LED light strip, the rear also uses the rear wing's quattro projection brake light for the first time. With streamer-type LED taillights, the effect is more sensory and recognition is stronger.