The 2022 Tata Tigor iCNG comes at a premium of ₹90,000 over its ICE variant but costs much less than the electric version. Does it offer enough to attract buyers caught between high fuel prices and the higher cost of EVs? Our first drive review seeks to find the answer.
By : Sabyasachi Dasgupta
| Updated on: 27 Jan 2022, 08:57 AM 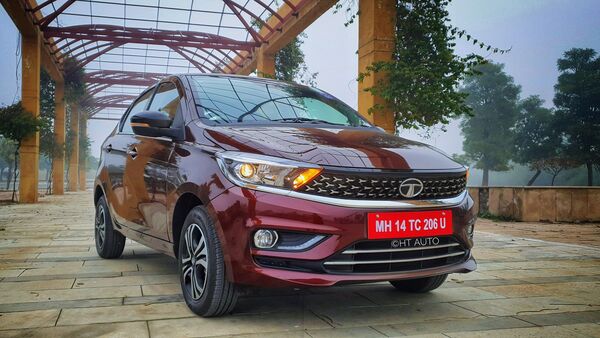 Tata Tigor iCNG was launched in January at a starting price of ₹7.70 lakh and will rival the likes of Hyundai Aura CNG. (Photo: Sabyasachi Dasgupta/HT Auto)

After a memorable December when it became the second-largest carmaker in India for the first time, Tata Motors decided to take the game a step further by entering the CNG segment this month. Already leading in the EV space in passenger vehicles, Tata's bid to push volumes to aim higher is evident from the launch of CNG versions of its Tiago hatchback and Tigor sub-compact sedan.

Tata Motors sets itself apart from other carmakers in the CNG segment with its choice to offer the iCNG technology in top-end trims only. Tata picked the top two trims of the Tigor - the XZ and XZ Plus variants - to make the deal more attractive. The other two carmakers in India offering CNG cars are Maruti Suzuki and Hyundai Motor. None of them offer CNG kits for top variant models with all the features they can offer.

The Tigor iCNG comes with all bells and whistles. However, Tata decided to make it more attractive by offering a few more new features over what the standard models get. It comes with a new exterior colour scheme called Magnetic Red and a dual-tone theme for the top-spec XZ+ with a blackened roof. Among other new features are rain-sensing wipers and auto headlights. At the rear, the Tigor gets the 'iCNG' badging to differentiate itself from the petrol and electric avatars. Tata also offers Tigor iCNG with new 14-inch Hyperstyle wheels instead of the 15-inch alloy wheels offered in the petrol variants. It is one of the reasons why the ground clearance of the Tigor iCNG is 5 mm less than the standard versions. Otherwise, there is not much change as far as the exterior is concerned. Tata Motors upgraded the interior of the Tigor in iCNG variants with a dual-tone black and beige colour theme. (Photo: Sabyasachi Dasgupta/HT Auto)

The changes are not restricted to the exterior only. Tata decided to give a facelift to the Tigor iCNG's interior too. It gets a dual-tone black-and-beige interior theme, chrome treatments on all the door handles and new seat upholstery. The rest remains similar to standard Tigor models with the seven-inch touchscreen infotainment system with Android Auto and Apple CarPlay, automatic climate control and cooled glovebox among other features. The digital display is now modified to accommodate both fuel gauges. It helps to decide when to press the dedicated button on the centre console meant for CNG mode. The 420-litre boot space inside the Tigor iCNG has lost much to the 60-litre CNG tank that can carry up to 10 kg of gas. The boot now offers only 205 litres and is enough to carry a few small-sized bags. However, Tata has managed to place the CNG kit smartly to leave some space under the cylinder to slip through smaller stuff.

Tigor is considered one of the safest cars on Indian roads, thanks to its four-star Global NCAP rating. Tata ensured the CNG models maintain the safety standards by using stainless-steel tube for the CNG kit and testing it adequately to prevent gas leaks. But, just in case, Tata also offers a fire extinguisher, placed right under the front passenger seat, as standard for the Tigor iCNG models.

Tata also offers a micro switch, which turns off the car automatically when the fuel lid is open. And it won't start until the lid is closed.

THE CONVENIENCE OF iCNG TECHNOLOGY:

The dedicated fuel mode button is a convenient feature which also works on the move to seamlessly switch between CNG and petrol mode.

Tata Tigor iCNG allows to switch on the ignition in the CNG mode itself with just the press of a button and is easier to switch between the CNG and petrol modes even on the move. It helps when you need more power to push the car ahead or uphill. In case of low fuel warning in the CNG kit, the iCNG technology switches to petrol mode automatically.

Under the hood, Tata relies on the 1.2-litre three-cylinder naturally-aspirated petrol engine to continue its service. The engine comes mated to only a five-speed manual gearbox and can produce a maximum output of 73.4 PS and 95Nm of torque. It is slightly less than 86 PS of power and 113 Nm of torque on petrol mode. The difference in performance was too little to figure out during regular city traffic. However, it felt slightly sluggish at times, especially when looking for a quick pickup to overtake. Otherwise, the Tigor on CNG feels as good as its standard versions. The suspension and handling around corners remain decent despite the extra load at the rear.

Tata decided not to offer an automatic transmission in the i-CNG version of the sedan. However, the five-speed manual gearbox is tuned well enough and will not make one miss the convenience of an AMT. The Tata Tigor iCNG offered around 35 kms per kg of mileage during our test drive.

Tata did not share any official figure of what kind of mileage the Tigor offers on CNG mode. Before we started, I turned on the CNG mode when the odometre read 54 kms and the tank was full. During our test drive, we kept the CNG mode on for more than a hundred kms. Later, we went to a CNG station to refill and find out what mileage we got out of it. We found the Tigor iCNG consumed only 3.3 kgs of gas for about 117 kms it ran on CNG mode, which means the mileage was at around 35 kms per kg.

The Tigor iCNG promises the best of both worlds for those who think petrol prices are too high and electric cars too expensive. By offering CNG in the top-end trims of Tigor, Tata wants to ensure that you do not miss out on some of its top features either. Should you buy it? If for nothing else, you can do your bit to reduce carbon footprint.