Hyundai is all set to drive in the facelift version of its popular sub-compact SUV Venue to India on June 16 as it aims to renew its rivalry with upcoming Maruti Vitara Brezza facelift SUV. Bookings for 2022 Hyundai Venue facelift are already open for an amount of ₹21,000.
By : HT Auto Desk
| Updated on: 15 Jun 2022, 10:54 AM 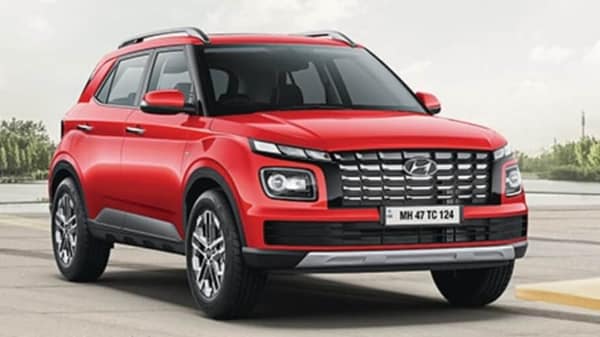 Hyundai Venue facelift 2022 SUV will be launched in India on June 16.

Hyundai Venue facelift SUV is all set to hit Indian roads as the Korean carmaker prepares to launch its first major product this year. 2022 Hyundai Venue facelift SUV, which has already been revealed partially, has been one of the best-selling models for the carmaker since its launch. In the new generation, the Venue SUV will be offered with a lot of changes which include updated design, reworked interiors and much more. The Venue facelift SUV aims to renew its rivalry with Maruti Suzuki Vitara Brezza, which will also launch later this month.

Ahead of the launch, Hyundai has revealed a lot of details about the 2022 Venue facelift SUV. The SUV now looks sportier with a redesigned front face. It now comes with a grille which has parametric patterns. The LED headlights and DRLs are also integrated into the design. The bumper at the front has also been given a facelift. From the sides, Venue keeps its older profile largely unchanged. The major difference is in the design of the alloy wheels. Major changes have happened at the rear where the new Venue gets LED taillights on either end connected by an LED strip running across the boot. The rear bumpers have also been redesigned.

The Venue facelift SUV will be offered with seven exterior colour options which include Polar White, Typhoon Silver, Phantom Black, Denim Blue, Titan Grey, and Fiery Red. It will also include a dual tone option of Fiery Red with Black roof.

Hyundai has not fully revealed the interior of the new Venue SUV. However, it is expected to come with fresh upholstery and upgraded features. The carmaker has confirmed that Venue will be offered with features like Home to car (H2C) with Alexa and Google Voice Assistant and more than 60 Bluelink connected car features among others. Among other features, the Venue will get a digital driver display, an 8-inch touchscreen infotainment system, wireless charging facility, sunroof and reverse parking camera.

Under the hood, the new Venue SUV will be offered with various choice of powertrains. While the carmaker has not revealed the specifics, the SUV may get a 1.5-litre diesel engine capable of producing 99 bhp and 240 Nm of torque. The petrol-powered Venue could get the familiar 1.0-litre Turbo GDi with 118 bhp of power and 172 Nm of peak torque. The 1.2-litre petrol engine, which can generate 82 bhp, could also be offered as one of the powertrain options.

The transmission job is likely to be handled by either a six-speed manual, or a six-speed automatic gearbox. Hyundai may also offer the iMT gearbox which was available with the previous generation models. The SUV will also get three drive modes which include Normal, Eco and Sport.

Hyundai is likely to offer the new Venue at a price ranging between ₹7 lakh and ₹12 lakh. It will compete with rivals like Tata Nexon, Mahindra XUV300, Nissan Magnite, Renault Kiger besides the upcoming Maruti Vitara Brezza.