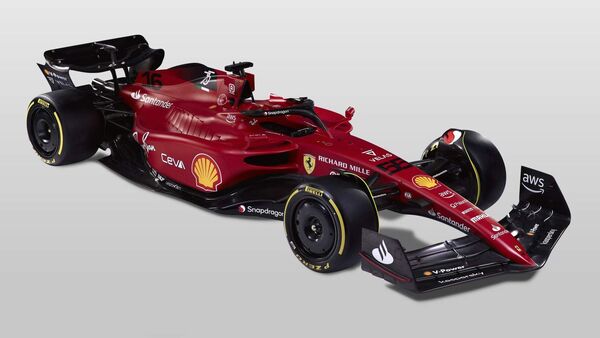 Ferrari on Thursday has unveiled its Formula One race car with a completely new design that complies with the regulations mandated for this season. The F1 racing team's 2022 season race car also comes with a completely new livery. Christened as Ferrari F1-75, this is the sixth F1 car unveiled this season after other teams such as Aston Martin, McLaren, Haas, Red Bull and AlphaTauri.

The car gets a black and red livery and another variation in the side pod design complying with the new set of regulations. The new livery shows a departure from Ferrari'slong-time Philip Morris International and with it the Mission Winnow branding.

Ferrari hopes that in the 2022 season that is slated to commence with the first race next month, it would be able to break its two-season hiatus, as it didn't win in the last two seasons. Ferrari hopes the 2022 race car will enable it to fight more energetically. The team is now aiming to re-emerge as a consistent challenger for race wins with the new model. The Ferrari F1-75 will be driven by drivers Charles Leclerc and Carlos Sainz this season.

Speaking about the design of the Ferrari F1-75 Formula One race car, it mirrors Aston Martin's racing machine this season in terms of the cooling louvres on the top. It gets over-wheel winglets, wheel covers, 18-inch wheels with low-profile tyres, a redesigned front wing and nose section, retro aero features to improve aerodynamic efficiency etc.

All these design changes come in line with the 2022 Formula One season rules announced by FIA. However, the powertrain remains the same as the previous season, just like other race cars of the championship. It gets a 1.6-litre turbo-hybrid engine that is capable of generating 800-volt from the battery.

The engine will run on sustainable fuel, as FIA has mandated. It will use 10 per cent ethanol mixed petrol or E10. Ethanol has to be a second-generation biofuel made in a sustainable way, which will ensure a near-zero carbon footprint.