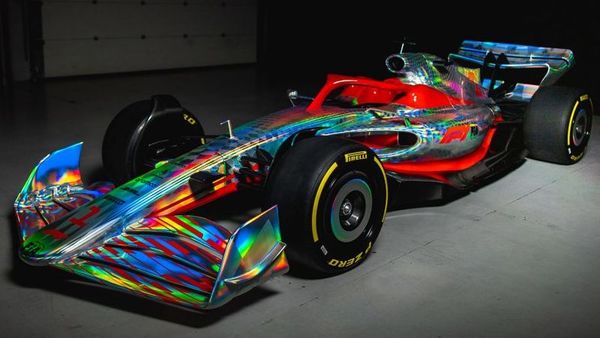 The new generation Formula One cars will come with a host of changes.

The 2022 Formula One season could be an interesting one. The Formula One race cars will come with a wide range of design and technical changes this time. Also, the 2022 F1 calendar has a record-breaking 23 Grand Prix schedule, starting from 20th March in Bahrain and finishing in Abudhabi on 20th November this year.

(Also Read: Formula One race cars to use wheel rims from this Japanese company)

As the automotive world is shifting its focus towards more sustainability and greener technology, Formula One being the apex motorsport is also adopting a plethora of changes from this season. The race cars to be used in the 2022 Formula One season will see these changes being implemented.

Here are some key facts about the 2022 Formula One race cars.

The 2022 Formula One race cars get over-wheel winglets for the first time. The over-wheel winglets help control the air coming off the front tyres and direct it away from the rear wing. These are meant to make the new F1 cars aerodynamically more resilient in close racing.

Wheel covers are back

The 2022 F1 cars get back their wheel covers that were discontinued since 2009. The wheel covers are meant to send airflow through the wheels, which helps in increasing downforce and eventually enhancing the stability of the car. Also, this adds to the chaotic aerodynamic wake coming off the cars.

The 2022 Formula One race cars will feature 18-inch wheels wrapped with low-profile tyres for the first time, replacing the traditional 13-inch wheels. The wheels will be supplied by a Japanese company BBS, while the tyres will be built by Pirelli. The bigger wheels are claimed to offer better aerodynamic efficiency and stability, while the tyres have been designed aiming to reduce the overheating issue.

The front wing and nose of the 2022 Formula One race cars have been completely redesigned. The new front wing design is to generate consistent downforce during close running and ensure the front-wheel wake is well controlled and directed down the car without disruption.

The 2022 Formula One race cars will come with an aero feature from the past. In the late 1970s, the F1 race cars used to be designed in the shape of an upside-down aeroplane wing. This used to create a huge amount of downforce as the race cars were pushed into the track. The 2022 cars come featuring fully shaped underfloor tunnels allowing the generation of large downforce.

The 2022 F1 race cars will use the same powertrains as 2021. While there will be a post of changes in the new F1 cars, the 1.6-litre turbo-hybrid engines will be retained by the teams.

The 2022 F1 race cars will run on more sustainable fuel. current regulations see the F1 cars running on fuel containing 5.75 per cent bio-components. From 2022, the bio-component ratio will rise to 10 per cent. This will be achieved through a move to E10 fuel. Ethanol has to be a second-generation biofuel made in a sustainable way, which will ensure a near-zero carbon footprint.

Safety has been at the forefront of the design of the 2022 F1 race cars. The new generation Formula One cars come built on a chassis that is capable to absorb 48 per cent and 15 per cent more energy respectively in the front and rear impact tests. Also, they are capable of absorbing greater forces in the static squeeze tests required to homologate the chassis and certify their strength.

The 2022 Formula One race cars have been developed after running approximately 7,500 simulations, which created around half a petabyte of data. This means 10 billion photos on Facebook, or 10 million four-drawer filing cabinets full of text documents. Those 7,500 simulations took 16.5 million core hours to solve.