2022 BMW X4 facelift SUV teased ahead of launch in India 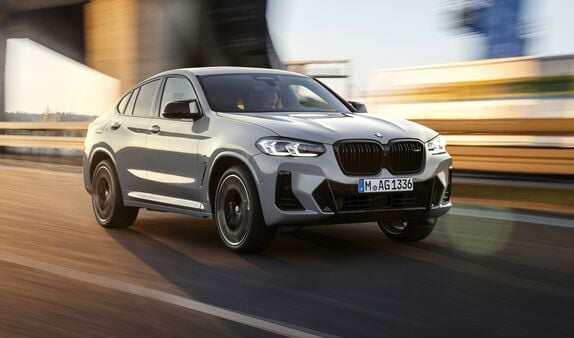 BMW is expected to launch the 2022 X4 facelift SUV in India next month.

BMW is all set to drive in the facelift version of yet another model from the X family in India. The German carmaker has teased the upcoming model, which is likely to be the X4 facelift SUV, ahead of its possible debut in March.

Earlier In January, BMW launched the facelift version of the X3 SUV. Available with both petrol and diesel engines, the 2022 BMW X3 SUV is being manufactured locally. Expect the upcoming 2022 BMW X4 facelift SUV to be produced at the carmaker's India facility as well.

The teaser gives away little with just a creative suggesting the arrival of a new car belonging to the X family. BMW terms the upcoming model a ‘bold statement’ of ‘active agility and striking aesthetics’.

The new generation BMW X4 SUV was introduced in global markets earlier last year. It is offered with a host of changes, which include the redesigned BMW kidney grille, sleeker new LED headlights with Matrix function and LED taillights among others.

The interior of the new BMW X4 facelift SUV has also been upgraded with a 10.25-inch free-standing, touchscreen infotainment system as standard. There is also the option to upgrade it to a 12.3-inch touch display. It will also offer virtual cockpit with digital driver display, head-up display, 360-degree camera among other features.

BMW is likely to offer the new X4 facelift SUV with three engine options, both in petrol and diesel. These include a 2.0-litre turbocharged petrol unit which is capable of churning out up to 250 bhp of power and 350 Nm of peak torque. The carmaker may offer two variations in diesel engines. There is a 2.0-litre four-cylinder unit which can generate maximum power of 190 bhp. There is also a 3.0-litre six-cylinder engine has the ability to produce 260 bhp of maximum power.

It's time to redefine boldness. #StayTuned to witness a true union of active agility and striking aesthetics - that makes a statement with every move. pic.twitter.com/8LCDKldtU0

The existing X4 model in India comes at a price of ₹67.50 lakh (ex-showroom). Expect the price to go up by a notch when the facelift version of the X4 SUV launches in the next few weeks. It will rival the likes of Mercedes-Benz GLC Coupe in India.