Home Auto Cars News 2021 Toyota Hilux At35 Revealed: All You Need To Know

The new Toyota Hilux AT35 model has become even more competent and appealing than before with the yearly update.It rolls on new 17-inch wheels with beefier 35-inch BF Goodrich KO2 All-Terrain tyres.
By : HT Auto Desk
| Updated on: 06 Feb 2021, 01:27 PM 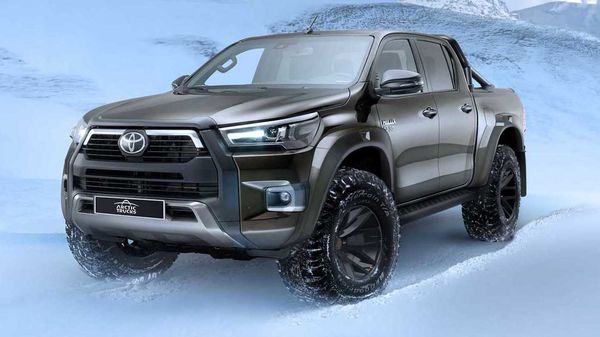 2021 Toyota Hilux AT35 has received a higher ground clearance which is up by 65 mm.

Toyota has revealed the new 2021 Arctic Truck variant of the Hilux truck. The new AT35 model has become even more competent and appealing than before with the yearly update. For 2021, the truck has received significant updates from the inside out.

The AT35 double cab model has been introduced in the 'Invincible X' trim level which has been updated with a number of tweaks that ups its off-road credentials. For starters, it has now received a higher ground clearance which has been increased by 65 mm. The approach and departure angles have also been improved by 9 and 3 degrees, respectively.

The suspension kit includes Bilstein suspension with custom springs and dampers at the front end. It also benefits from a revised anti-roll bar and modified rear dampers which now get extended shackles. Against the standard model, the Hilux AT35 gets an additional 40 mm front and 20 mm rear suspension lift. As per Toyota, it also gets modified front and rear differentials for better torque delivery.

The company has also introduced changes to its frame and inner wheel arches an the overall bodywork has also been tweaked. It now rolls on new 17-inch wheels with beefier 35-inch BF Goodrich KO2 All-Terrain tyres.