2021 Audi S5 Sportback is a capable mid-range performance sedan that is likely to once again delight speed aficionados.With looks adding to its credentials, the Audi S5 Sportback comes via the CBU route.
By : Shubhodeep Chakravarty
| Updated on: 30 Mar 2021, 01:22 PM 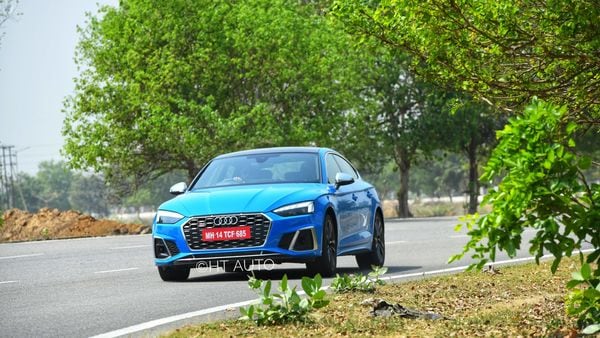 Performance vehicles are making their presence felt in the Indian car market more than ever before. From local production to a number of offerings brought in via the Completely Built Unit (CBU) route, for those on the lookout for a thrill ride may have never had it this good. And Audi here in India, and in particular, wants to ensure that it has a showroom that has cars that are brought in as soon as is possible post their global launches. As such, the 2021 Audi S5 Sportback forms a key part of its strategy that also includes offering niche products to the discerning customer looking for a ride that makes a solid impression. The S5 Sportback is all about impressions and whether racing on open roads or rambling along city roads, here is a mid-range performance car that claims to do it all with panache.

The S5 Sportback was never the volume driver for Audi India. But then again, it was never meant to be either. Instead, it stands testament to what the German giant is also capable of and adds a diverse flair to the product portfolio the car maker perhaps wants to have here in the country. The 2021 S5 Sportback, however, also seeks to stand out of the crowd and grab the gaze of its target audience, an audience that wants speed and thrill while also enjoying the leisure of daily drives. On these counts then, how well does the updated S5 Sportback stand? Here's a detailed take:

Those familiar with the S5 Sportback's exterior design language would immediately recognize this car for what it is. But the updates to the body of the 2021 edition would also be amply evident at just a glance. 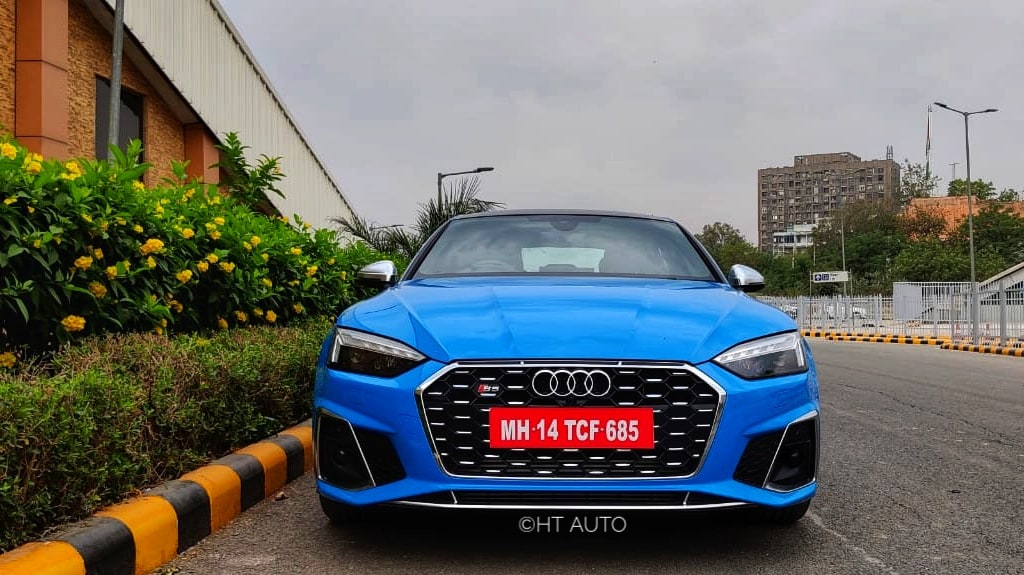 The S-specific design elements on the 2021 S5 Sportback highlight its exterior design language.

This review unit stood out due to the sheer brilliance of its blue hues but go beyond the shades and the design hues truly come alive. The all-new LED head light and tail lights look a whole lot more attractive and go well with the sporty character of the car. The sharper bumper gets a glaze of silver which also adds a bit of edgy vibe to the front grille. The car is noticeably wide which goes on to add to its aggressively sporty visual trait while the five-spoke 19-inch alloy wheels look genuinely impressive. 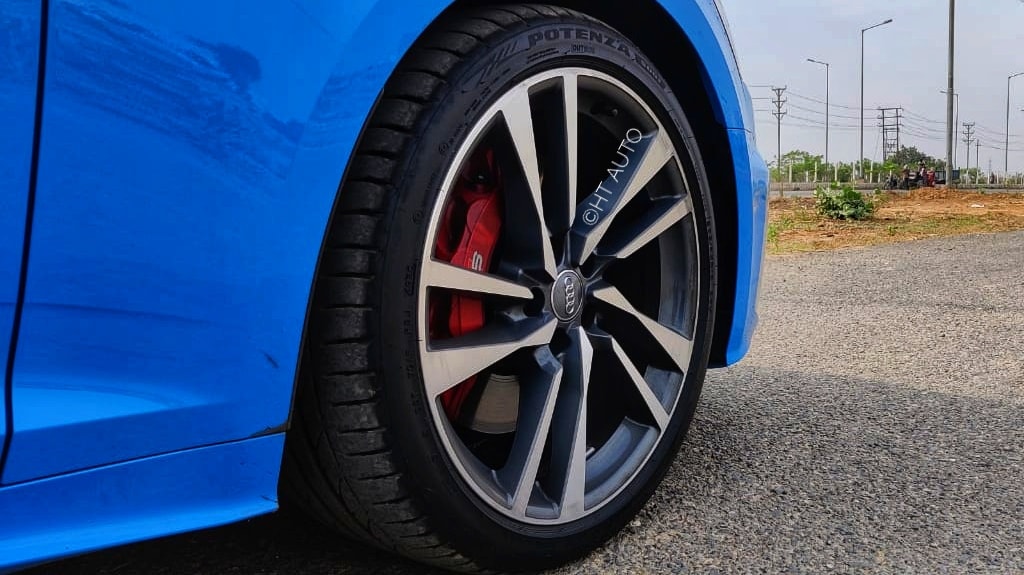 The graphite grey alloy wheels help the S5 Sportback have a sportier appeal.

A strong body line running across the side of the S5 Sportback, just over the door handles, and another tapering line from wheel arch to wheel arch, seeks to give some definition to this car here. 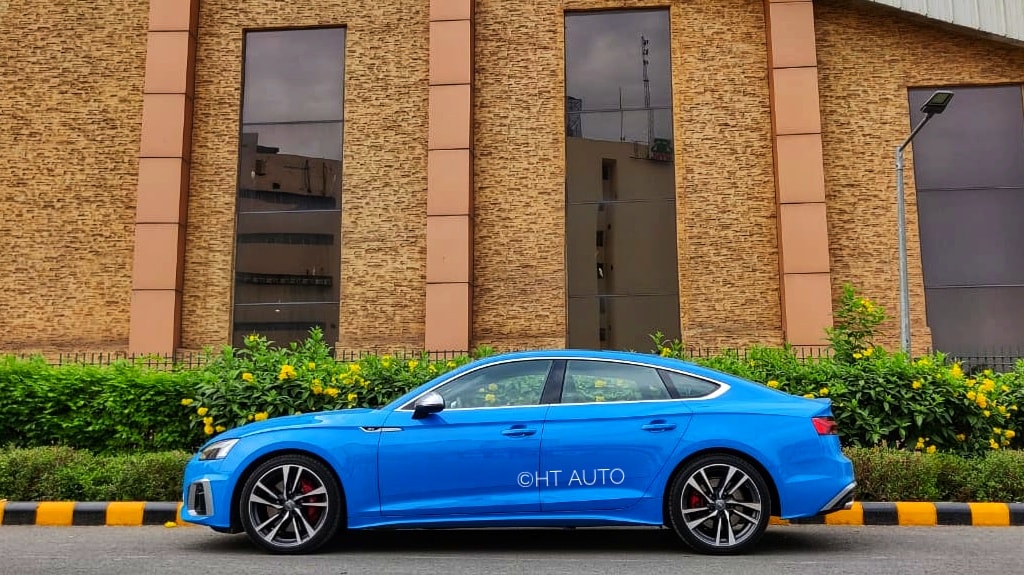 A low-slung side profile of Audi S5 Sportback, complete with its tapering roofline, helps it get an aggressive look.

The look is completed by a smart rear which, again, gets silver highlights just over the twin exhaust valve units and a slightly pronounced boot trunk lid. Looks can indeed be subjective but even the most ardent of SUV lovers are most likely to take a pause to appreciate just how scrumptiously sporty the 2021 S5 Sportback looks, complete with its tapering roofline which is what actually gives it its name. 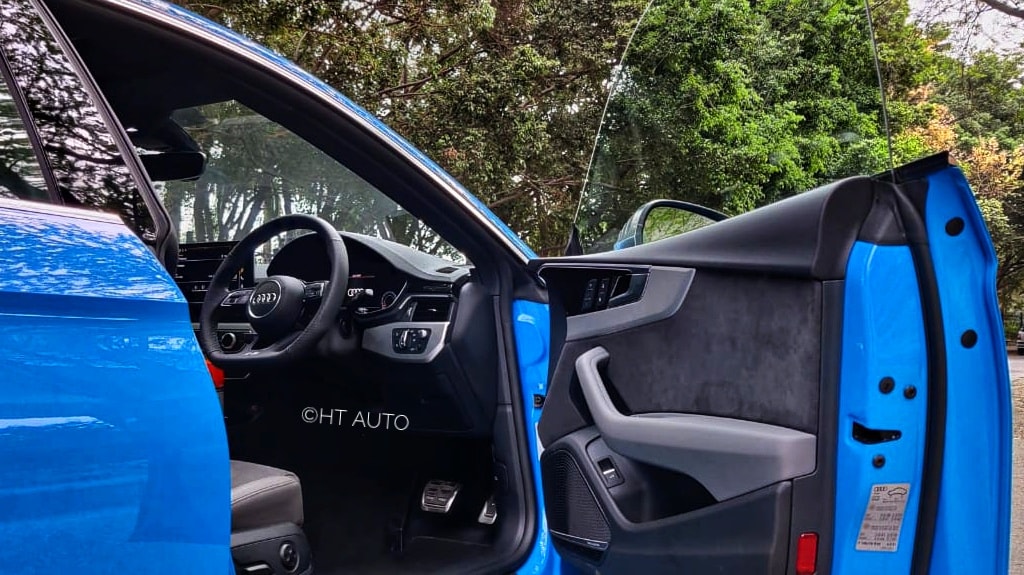 Frameless windows on the Audi S5 Sportback is an appealing touch.

In the Thick of Things

The S5 Sportback is a performance vehicle but unlike several such vehicles from rivals which could seem a tad intimidating to someone stepping in for the first time, this Audi is more welcoming than that other bit. For someone accustomed to an Audi, this here is home immediately but even if coming in from a different segment or a rival brand, the 2021 S5 Sportback seeks to put out much of what it has on offer on the inside in a well-appointed manner.

The most noticeable update here comes in the form of a 10.1-inch main infotainment unit. The screen is what is being offered in several other newer Audi models and it is quite evident why. Vivid, responsive and well within reach for both the driver and the front passenger, this screen is truly the hub of it all. Large windows and a sunroof on the S5 Sportback makes for an airy cabin.

Sitting under the screen are the conventional AC vents which can be controlled by the familiar rotary dials for temperature and the buttons for related functionalities like air direction, speed and more.

Under these buttons are additional buttons for drive-related controls, most prominent of these are clicks for drive mode selection. As with most other Audi cars, these buttons once again seem a tad too distant to me because I tend to pull my driving seat quite far back.

The center console stack hasn't been changed and that's just as well. The twin cupholders, storage compartment with lid for wallet, the gear-shift set up - here's a familiar sight that ought to be familiar for times to come as well. There is, however, only one USB port here and the lack of a dock for wireless phone charging is conspicuous by its absence. In fact, there ought to have been more ports everywhere in the car than there really are. On the feature front apart from the USB ports though, much of all is covered - generous sunroof, support for Android Auto and Apple CarPlay, three-zone climate control and optional extras like heads-up display, parking assist and premium Bang and Olufsen music system. 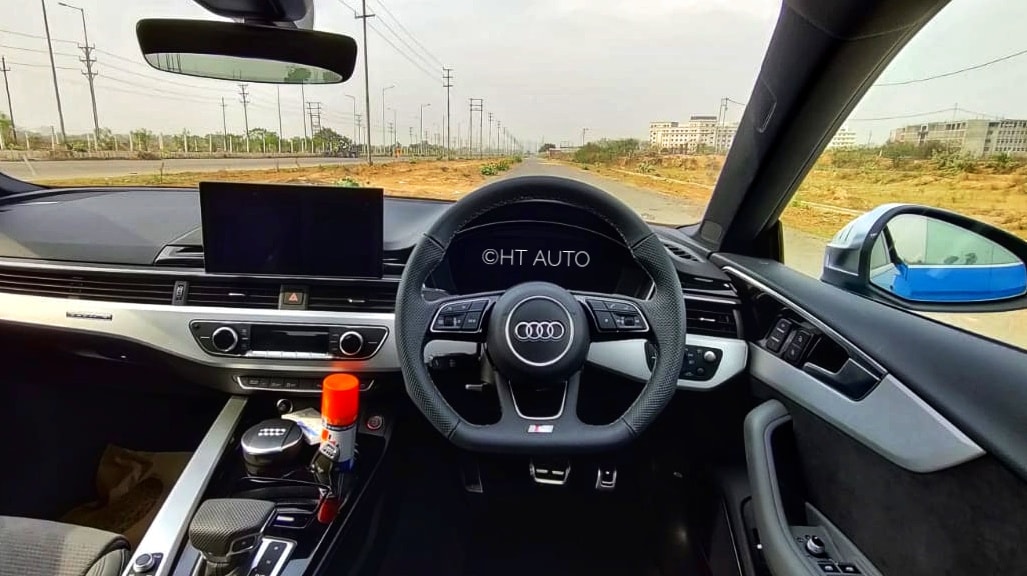 For a performance car, the Audi S5 Sportback has plenty of storage space for occupants.

The virtual cockpit for the driver has always been Audi's strength and the 2021 S5 Sportback makes full use of this. A flat-bottomed steering further adds to the credentials that this car here would perhaps be best experience in the driver's seat. 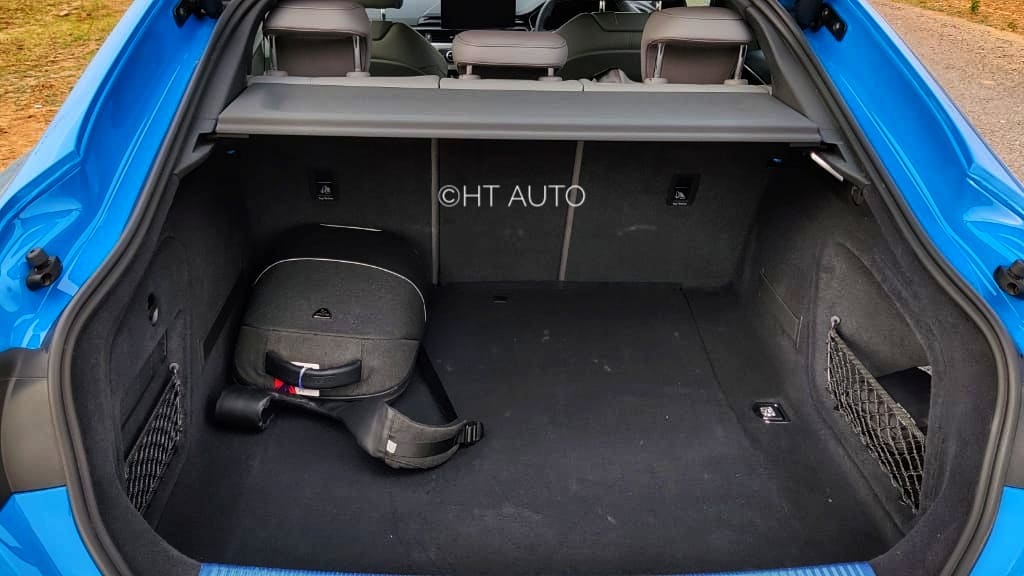 Over 460 litres of boot space, split rear-seat folding and a large loading area means the S5 Sportback can easily accommodate most of what you may pack for a getaway.

Passengers are at the rear would likely have to enjoy the drive of the 2021 S5 Sportback alone because there's not much else on offer here for them. Yes, the sport seats everywhere are nice and comfortable. Yes, the quality of upholstery is top-notch. And yes, there's decent levels of knee room and under-thigh support as well. But the rather low-slung profile of this car may make getting in and out a tad cumbersome while the tallest of passengers may not find the tapering roofline too appealing. Leg space is just about adequate and while the rear AC controls are a god-send for Indian weather conditions, there is only one 12v charging socket here. Best to bribe the driver and take the wheels.

While all the seats inside the Audi S5 Sportback are well appointed and have generous cushioning, headroom and leg space at the rear may be a cause of concern for tall occupants.

While there are plenty of neat updates on the outside as well as in the cabin, the trusty 3.0-liter TFSI petrol engine remains as is and is the core strength of the S5 Sportback. It produces thumping power of 354 horse and delicious 500 Nm of torque. Quattro AWD is available and the sedan fires with a refined grunt that is pleasing to most senses.

It may not be an RS. It may not have a launch mode. But the S5 Sportback doesn't care for what it isn't. Instead, it fires to 100kmph in a little under five seconds. There is a roar that, while not thunderous, is every bit menacing. There is propulsion, while not adrenaline pumping, which is every bit thrilling. To compare it to its RS cousins may not be fair at all but as far as family equations go, this sedan sure can silence probing questions around its drive credentials.

Quattro permanent all-wheel drive with a self-locking center differential makes S5 Sportback remain in control regardless of how much one is pushing it to its extremes.

What helps its cause, also, is a slick eight-speed Tiptronic transmission system. Whether making the car go through its routine runs in Comfort mode or pushing pedal to the absolute metal in Dynamic, the smooth and timely shifts put on tailor-made guises which help the S5 Sportback's drive experience get enhanced.

The S Sports suspension deserves a thumbs up as well and holds its own well for most parts. Just don't attack potholes at speeds and the sedan will manage itself - and occupants - well.

Audi wants to be quicker in bringing its products to India after their respective global launch. But does the S5 Sportback deserve local assembly?

﻿There's not much that the 2021 S5 Sportback can be faulted for. It has the performance that it puts right on top of its resume. It has the looks to evoke emotions. And it has a cabin that is - for most parts - comfortable and connected for four. But it also has a price point that may make enthusiasts pause. At ₹79.06 lakh (ex showroom), the S5 Sportback isn't for every budget, regardless of much one loves Audi and swears by performance sedans. For now, the S5 Sportback comes through the CBU route, and hence the price tag. Solely from the price point, it may have a stiff fight ahead but if and when there's a chance for local assembly - a route a few rivals in this space have started taking now, this car here could be a runaway hit and then some more.