The 2020 Skoda Rapid gets a new 1.0-litre TSI turbocharged petrol powerplant which is a three-cylinder unit.It will be available in five variant options including Rider, Ambition, Onyx, Style and Monte Carlo.
By : Prashant Singh
| Updated on: 12 Jul 2020, 05:13 PM 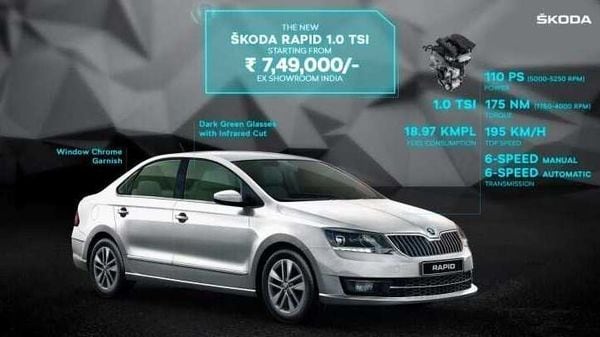 Apart from the new Superb and the Karoq SUV, Skoda India on Tuesday also launched the BS 6 compliant 2020 Rapid 1.0 TSI at a price tag of ₹7.49 lakh*. It is a B-segment sedan which rivals the likes of Hyundai Verna, VW Vento, Honda City and more such cars.

With the new update, the previously found BS 4 spec 1.6-litre MPI petrol and 1.5-litre TDI turbocharged diesel engines have been discontinued. The sedan now gets a new 1.0-litre TSI turbocharged petrol powerplant which is a three-cylinder unit, unlike the older options which were four-cylinder units.

The top-spec Skoda Rapid Monte Carlo or 'Monte Carlo' was also up for display at the Auto Expo 2020.