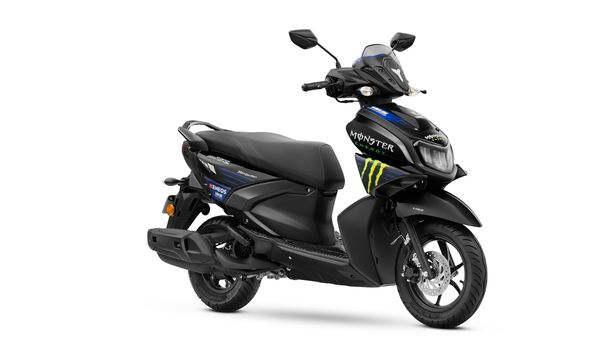 India Yamaha Motor on Tuesday announced the launch of the Monster Energy Yamaha Moto GP Edition of its newly launched RayZR scooter. It has been priced at ₹81,330 (ex-showroom, Delhi).

The all-new RayZR Monster Energy Yamaha MotoGP Edition sports the company's Moto GP branding on its body panels. Apart from the set of sportier graphics and a slightly higher price tag, there's no other change on the new scooter's Monster Energy Edition.

At the heart of the new RayZR Monster Energy scooter sits a 125 cc Hybrid Power Assist, fuel-injected Blue core engine with a maximum power output of 8.2 PS and 10.3 Nm.

It comes with a Smart Motor Generator (SMG) System that acts as a hybrid system featuring an electric motor for power assist during acceleration. The system also enables other functions such as Quiet Engine Start System and Automatic Stop & Start. The scooter also gets a Side Stand Engine Cut off Switch which is part of its standard kit.

At the launch of the newly updated RayZR lineup earlier on Tuesday,  Motofumi Shitara, Chairman, Yamaha Motor India group of companies said, “The launch of the Hybrid version of the new RayZR 125 FI and Street Rally 125 FI has allowed Yamaha to further expand its portfolio of Hybrid scooter offerings in India. After receiving immense response for the Fascino 125 Fi Hybrid, we are confident about further strengthening our position in the market, with these new offerings."

Yamaha is also likely to launch a new variant of the YZF-R15 V3.0 in the Indian market named R15 M. More details are likely to roll out later this month.