The upcoming Yamaha FZ-X is likely to launch in India this summer. Its dimensions are slightly different from the existing FZS motorcycle.
By : Prashant Singh
| Updated on: 17 Apr 2021, 12:49 PM

Yamaha Motor India is planning to introduce a new sporty commuter in the market this summer. As per a new government document surfacing the internet lately, Yamaha FZ-X will go on sale in India soon.

The FZ-X name was registered back in December 2020. It was also speculated that this name could likely be used for an adventure motorcycle spawned out from the Yamaha FZ series, but chances are less likely.

A new Yamaha commuter was also spotted getting tested on the Indian roads in March 2021, but it is yet to confirm if FZ-X is the same motorcycle or not.

The leaked document (below) suggests that the bike will feature the 149cc FZS-FI platform and not the 250cc. It is most likely the same engine that delivers 12.4 bhp of maximum power at 7,250 rpm. Expect the transmission option to remain the same five-speed unit. 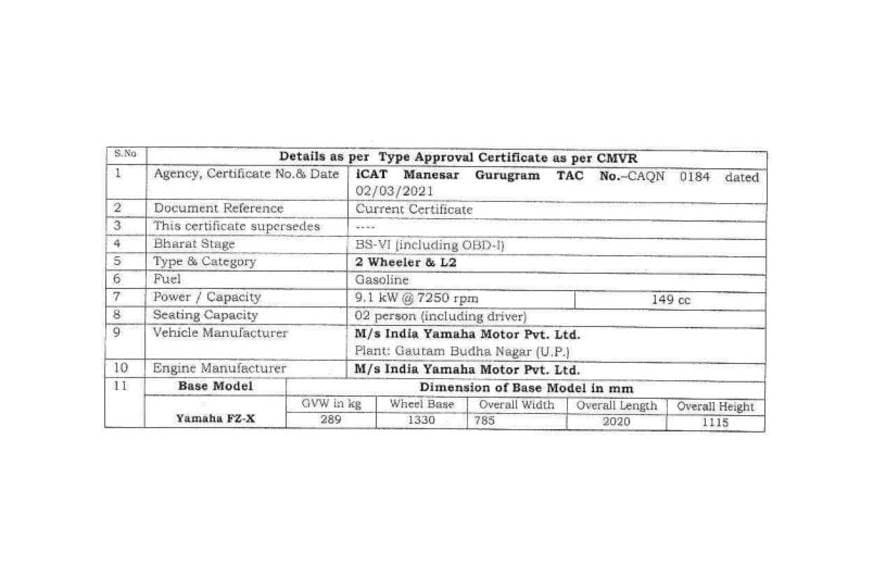 As far as dimensions go, it will have 2,020mm of length, 785mm of width and 1,115mm of height. For the record, the FZS-FI measures 1,990mm x 780mm x 1,080mm in terms of length, width and height figures. Goes without saying, the dimensions are tweaked thanks to the possible unique bodywork on the motorcycle. The wheelbase, on the other hand, will remain identical at 1,330mm.

As far as its India launch goes, the bike is expected to be launched towards mid-2021. More details are likely to roll out soon in the future.