Royal Enfield has launched the next-generation Classic 350 which could bolster prospects in the upcoming festive period.
By : HT Auto Desk
| Updated on: 03 Sep 2021, 10:50 AM 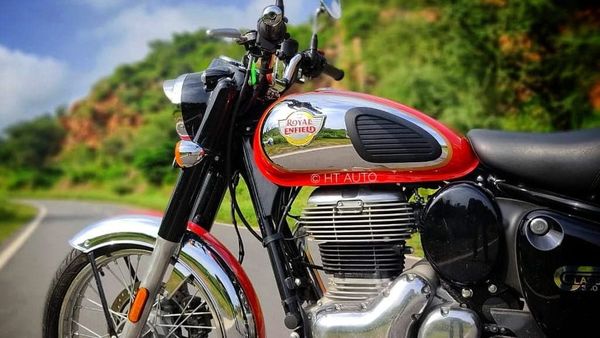 The latest Royal Enfield Classic 350 could once again galvanize sales in the domestic market.

Royal Enfield reported total sales of 45,860 bikes in the month of August which included 39,070 in the domestic market. The overall figure reflected a 9% decline from figures in the same month in 2020 but there may reasons to assume that this dip is temporary at best. This is because with the launch of the new-generation Classic 350, Royal Enfield is appearing confident of returning to the green in terms of sales figures.

Royal Enfield Classic 350 has a place of prominence in the company's product portfolio and is responsible for powering sales here. And with the launch of the next-generation Classic 350 being expected, the sales of the motorcycle may have slipped in August. Royal Enfield has now launched the next-generation Classic 350 at a starting price of ₹1.84 lakh (ex showroom) and could once again see traction for the bike among buyers increasing.

(Read this story in Hindi here)

Royal Enfield Classic 350 is based on the previously announced Meteor 350 motorcycle. It is built on the same J-platform that houses Meteor 350. Also, the new Classic 350 gets several key components from the Meteor 350. Offered in as many as 11 colour options, the Classic 350 is the second model from the brand to get the Tripper turn-by-turn navigation system and also boasts of a new headlamp with pilot lamps, revised instrument cluster featuring a fuel gauge and LCD information panel.

The motorcycle runs on 19-inch front and 18-inch rear wheels and gets power from a 349 cc single-cylinder four-stroke engine mated to a 5-speed gearbox.

Classic 350 is at the core of Royal Enfield's dominance in the motorcycle business in India, one that may have slipped 18% in terms of domestic sales last month - compared to August of 2020. But the road ahead may be less challenging considering the new product(s) and the upcoming festive period.