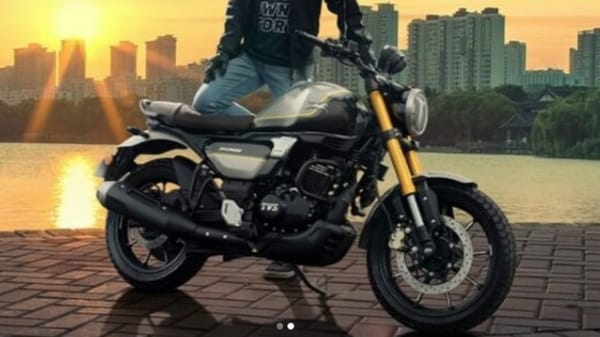 TVS Ronin motorcycle has been leaked online ahead of its nearing debut. The cruiser looks chunky and muscular in its visual appearance. Upon launch, it will challenge rivals like KTM 250s, Bajaj Pulsar 250s and Husqvarna 250s. The motorcycle comes with a retro-themed scrambler-like appearance. It looks like TVS imagined the motorcycle as a machine that would be equally capable of taking the asphalt and slightly rough roads as well. At least, the design suggests that.

Speaking about its design, the TVS Ronin adopts a neo-classic body style that is basically a cross between a traditional low-slung cruiser and a rugged scrambler. It sports a retro-themed round headlamp with a circular LED daytime running light. Also, a chunky and sculpted fuel tank with prominent knee indents and old-school side panels is there. The motorcycle appears without any tailpipe. It wears a dual-tone paint theme and the engine block along with the engine guard has been finished in black. It is likely to come with a round-shaped fully digital instrument cluster.

The sturdy gold-finished inverted telescopic front forks, alloy wheels, and thick tyres add a masculine vibe to the motorcycle. For braking duty, it gets dis brakes on both front and rear wheels.

While TVS is tight-lipped about the Ronin, it looks like the motorcycle has taken inspiration from the Zeppelin cruiser concept that was showcased to the world back in 2018. However, there are several elements missing in the new model, which were present in the concept version.