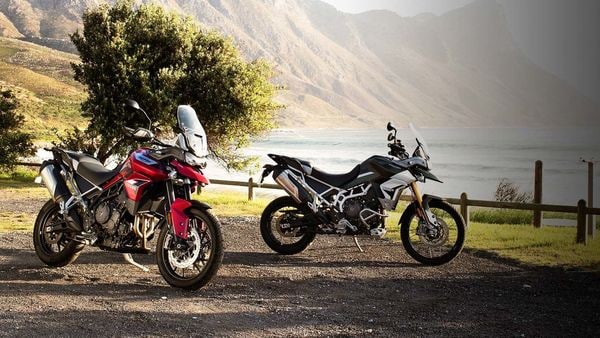 Triumph Tiger 900 range is set to be slightly more expensive than the Tiger 800.

Triumph Motorcycles India is gearing up for the launch of its much anticipated Tiger 900 range in April. The Tiger 900 will be a successor to the Tiger 800 which has a cult following of its own, not only in India, but across the globe.

The Tiger 900 is an all-new motorcycle altogether and it doesn’t source any element from the older Tiger 800. For example, everything from the engine, suspension, chassis and body panels have been designed from scratch and with the sole purpose of improving on the outgoing Tiger 800. Internationally, it is made available in three versions, the Tiger 900 (base), the road-biased ‘GT version’ and the off-road-focused ‘Rally version’. The top-spec variant in both the GT and off-road versions get the ‘Pro’ suffix. It remains to be seen which variants/versions the company will introduce in India.

The Tiger 900 sources power from a newly developed engine. It is an 888cc, inline-three, liquid-cooled unit featuring a new 1-3-2 firing order and off-set crank, claimed to lend it a very distinctive exhaust note. The engine produces 93.9 PS of power and 87 Nm of peak torque. The company says that it is considerably better in terms of mid-range delivery in comparison to the previous unit.

As far as features go, the Tiger 900 is kitted to the teeth with the latest technology. The top-of-the-line GT Pro and the Rally Pro spec models make use of IMU-assisted electronics, cornering ABS, traction control and riding modes ( Road, Rain, Sport, Off-road and Rider). To make the Rally Pro model more acclimatized to the adventure focused riding, it gets switchable ABS and traction control which allows the rider to have more fun in the off-road conditions. The ‘Pro’ spec variants also sport a new 7.0-inch TFT instrument console which is enabled with Bluetooth connectivity and turn-by-turn navigation system. Also standard is the inclusion of heated seating and grips.

When launched, expect the Triumph Tiger 900 range to be placed in the range of ₹12 to ₹16 lakh (ex-showroom).