The millionth Triumph Motorcycles, a custom-made Tiger 900, rolled off the production line marking a major milestone for the Hinckley-based two-wheeler manufacturer.
By : HT Auto Desk
| Updated on: 01 Dec 2021, 16:02 PM 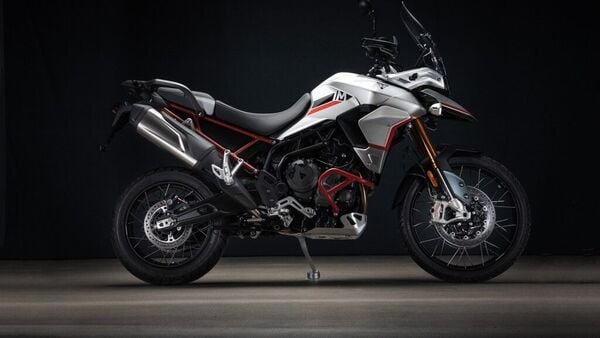 The millionth Triumph Motorcycles, a custom-made Tiger 900, rolled off the production line marking a major milestone for the Hinckley-based two-wheeler manufacturer.

British two-wheeler manufacturer Triumph Motorcycles has hit a major milestone which coincides with the brand's 120th anniversary next year. The brand has rolled out its millionth motorcycle from its facility based in Hinckley.

The millionth motorcycle built since the brand’s return in 1990 is a custom painted model of Triumph Tiger 900 Rally Pro. The motorcycle was unveiled at Triumph’s Global Headquarters in Hinckley by CEO Nick Bloor today.

The custom-made Tiger 900 gets silver paint scheme and graphics with text ‘1M’ which highlights the landmark of one millionth production of the brand. The custom-made Triumph Tiger 900 Rally Pro will be displayed on Triumph’s stand at this year’s Motorcycle Live show at the NEC as well as in Triumph’s Factory Visitor Experience in a new, specially created 120-year anniversary display.

Nick Bloor, CEO at Triumph Motorcycles, said while unveiling the special two-wheeler, Everyone at Triumph is incredibly proud to have played a part in achieving such a momentous moment in the modern history of this iconic brand. Over the 31 years since we re-launched Triumph with a new line of British designed motorcycles in Cologne in 1990, we have shared so many great moments with our fans across the world. From returning to the TT champions arena, to entering the MotoGP paddock with our Moto2 Engine partnership to supporting the biggest global riding event and its great cause for health and wellbeing with the Distinguished Gentleman’s Ride, to mention only a few. Triumph’s success has always stemmed from the passion and commitment we share with our riders.

We are committed to taking the brand to even greater heights, and with the forthcoming launch of our brand new Tiger 1200, new competition MX and Enduro motorcycles, plus our strategic partnership with Bajaj to create smaller capacity bikes, I am delighted to say that the future for Triumph and its fans across the world will be just as exciting and rich as the last 30 years has been, Bloor added.

Triumph Motorcycles dates back to early 1900s when the first motorcycle from the brand on sale in April 1902. The brand's modern era began in 1990 with a completely original range of motorcycles designed and built in a brand new, state-of-the-art factory at Hinckley. It has grown massively in the last 30 years with an international network of more than 700 dealers in 57 countries. The last 12 months have been the most successful phase for Triumph with more than 75,000 bikes registered globally and a turnover of 650 million pounds.