This thoroughbred racer was once a Royal Enfield Continental GT650 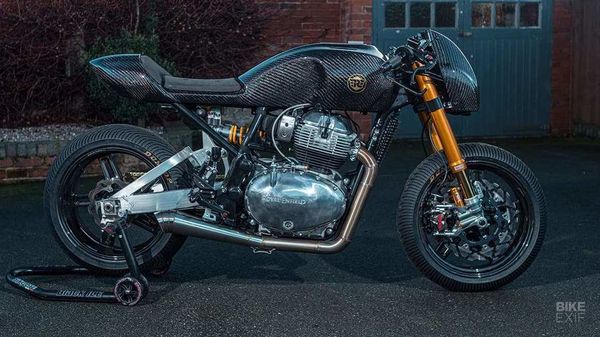 The entire stock body kit of the motorcycle was stripped off and replaced with a new custom kit. Image Credits: Bike Exif

Royal Enfield motorcycles are especially popular among the custom bike building community. The simple and retro design of Royal Enfiled bikes offer an unrestricted platform that allows the builders to tweak the bike's character to a greater degree. The simplicity of the overall design and technology of the RE bikes is also said to make them fairly easy to work on.

The Chennai-based bike maker launched the new 650 Twins a few years back. Both the bikes (Interceptor 650 and Continental GT650) have risen to fame not just in the home market but also in several markets across the globe. Now a UK-based custom bike workshop (Partridge Design) owned by Anthony Partridge has come up with a modified Continental GT650. This project was built for the second season of Discovery Channel’s 'Goblin Works Garage.'

As visible from the looks of it, the entire stock body kit of the motorcycle was stripped off which allowed Partridge to use a new custom kit. The fuel tank with Racefit fuel filler cap was custom built by GIA Enginerring, and on top of it, a number of carbon fibre parts were installed.

A custom swingarm was crafted to give the bike a longer wheelbase, also an Öhlins TTX GP Pro monoshock was added on to the rear for improving the performance. This was further matched with Öhlins FGR300 upside-down units, with custom triples and quick-release axles by FastTec. The bike was also given carbon fibre wheels courtesy of BST. These units were shod with Dunlop Sportmax GPA tyres. Moreover, even the brakes were custom built on the bike. It was given Brembo callipers which bites on Galfer discs. The brakes get Venhill lines, and Magura front master cylinder.

Other additions on the bike include a handmade exhaust, footpegs, mirrors, a new set of clip-on handlebars, and turn signals by Rizoma, Reese Racing switchgear, as well as a Highsider LED headlight.