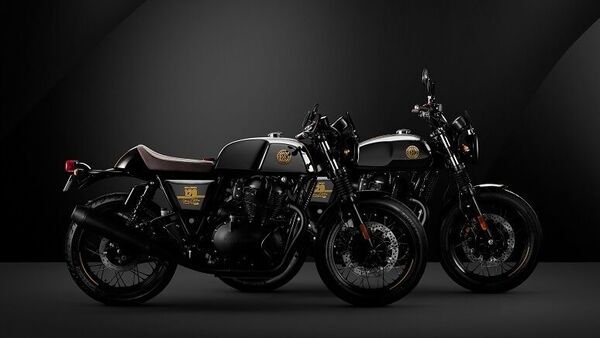 Royal Enfield's new 120th Anniversary Special Editions of the Interceptor 650 and Continental GT 650 have been sold out in the Australian market. These limited-edition bikes first broke cover at the world stage last year at the EICMA 2021. Produced in limited numbers, these bikes have been distributed evenly between Europe, America and Southeast Asia.

Previously launched in India, these bikes were also sold out in the country within 24 hours of bookings commencement. And the history repeats itself as the units allotted for the Australian market were also declared to be sold out within just 24 hours.

What sets these models apart from the regular bikes is their limited availability and the set of cosmetic updates which makes them fairly unique to look at. Both the 120th Anniversary edition models are offered in fully blacked-out avatar with several golden hints lending a fairly premium look and appeal. The black chrome paint on the bikes also contribute to a stealthy look and what makes the exteriors even better to look at is the use of gold pinstripes on the fuel tank and the golden graphics on the side panels.

Also, the bikes feature a special motif on the fuel tank with a unique serial number on each motorcycle for added exclusivity. That said, special accessories such as brown handle grips and stitched seats along with black flyscreens, bar-end mirrors give these models a fairly unique look.

Save for these details, the rest of the bits remain unchanged. These limited edition bikes commemorate the company's 120 years of existence.