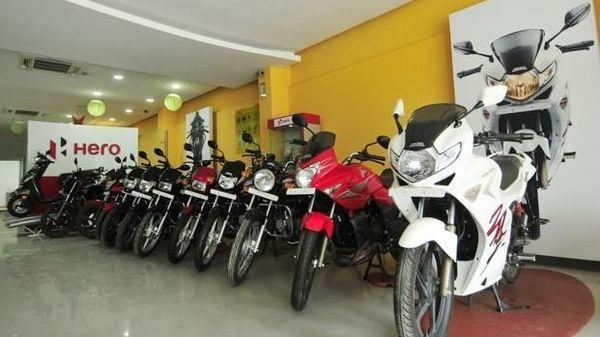 File photo of Hero MotoCorp products in a showroom

Two-wheeler major Hero MotoCorp reported a decline in sales for January 2020 to 501,622 units from 582,660 units sold during the year-ago month.

The company's entire scooter portfolio has migrated to BS 6, and it has stopped producing any BS 4 scooter.

"By January'20 end, Honda's BS 6 production increased to 60 per cent of its total business volume and beginning February 2020 we are achieving 100 per cent transition to BS 6 production," the company said in a statement.

Identically, two-and three-wheeler manufacturer TVS Motor Company reported a sales dip of 234,920 units in January 2020 as against sales of 282,630 units in the corresponding month of 2019.

"In a planned and systematic manner, the company has completely transitioned production to BS 6 vehicles for domestic market," it said in a statement.

Commenting on the sales performance, Koichiro Hirao, Managing Director, Suzuki Motorcycle India said: "January 2020 is the first month in the last 41 consecutive months where the market sentiment has arrested our growth in the domestic market."

"On a cumulative basis however, we have registered a 7.2 per cent increase in our domestic sales."

According to Shamsher Dewan, VP and Sector Head, Corporate Ratings, ICRA: "The initial set of sales data released by two wheeler OEMs continue to reflect the weak demand trend. However, retail sales are expected to improve in the near term on back of some pre buying ahead of roll out of BS 6 compliant vehicles."

"ICRA expects price hike of 11-13 per cent due to BS 6. While demand headwinds will persists in FY21, rural sentiments are likely to improve supported by better rabi inflows."