Sid Lal, CEO at Royal Enfield, took to social media to offer the first official look at the 350 cc Hunter motorcycle. The two-wheeler manufacturer will launch the Hunter 350 as well as Bullet 350 this month.
By : HT Auto Desk
| Updated on: 05 Aug 2022, 12:16 PM 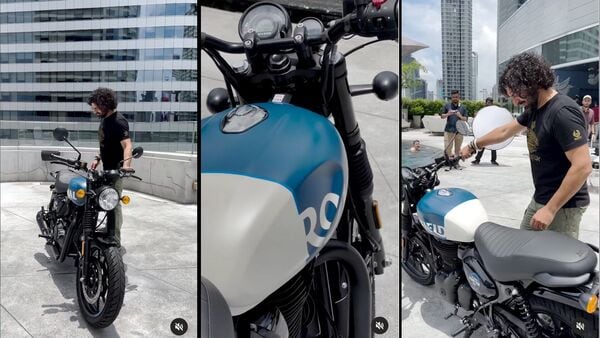 The Hunter 350 seen in the video comes with dual-tone white and sky blue colour. Sid Lal did not reveal too many details about the Hunter 350 yet. According to some reports, the Hunter 350 will be offered in three different trims called the Retro, Metro and Metro Rebel. The Hunter 350 is among two models expected to be launched soon. The other one is the Bullet 350 motorcycle.

The base variant of the Royal Enfield Hunter 350 will come equipped with spoked wheels with tube-type tyres, single-channel ABS, rear drum brake and halogen turn indicators. The higher variants will get LED turn indicators, alloy wheels and dual-channel ABS. The video shared by Sid Lal appears to be one of the top-spec models. There is also a possibility that the LED turn indicators are offered as an official accessory by the manufacturer.

Royal Enfield is also expected to offer Tripper navigation system as an accessory with the Hunter 350. The switchgear and the instrument cluster will be borrowed from the Scram 411 and the Meteor 350. The Hunter 350 will be based on the J-platform which is already being used on the Classic Reborn and Meteor 350.