Royal Enfield Scram 411 was previously set for February'22 launch. The ongoing third wave of pandemic has also forced many other automakers to opt only for digital events.
By : Prashant Singh
| Updated on: 28 Jan 2022, 11:17 AM 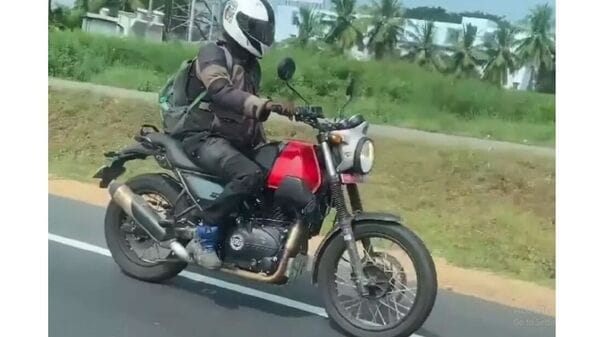 Royal Enfield Scram 411 is now likely to be launched in India in March 2022.

Royal Enfield is all set to kick start the year 2022 with the launch of its Scram 411 motorcycle, but looks like the ongoing third wave of Covid-19 has slammed brakes on the company's plans. The motorcycle which was previously set for February'22 launch is now likely to go on sale in the country only by March, people aware of the developments hinted HT Auto.

The ongoing third wave has also forced many other automakers to opt only for digital events seeing the peaking case of the new virus variant.

Scram 411, will come out to be the company's very first launch for the year 2022. It will basically be a derivation of Royal Enfield's much popular Himalayan ADV. And will be a more road-biased version of the Himalayan adventure motorcycle. It was also recently spotted in a new dual-tone paint theme doing testing rounds on the public roads. The prototype of the bike was seen sporting a dual-tone red-black fuel tank while the rest of the body panels were seen dipped in black (more details here).

At the heart of the upcoming Scram will sit the familiar 411cc, single-cylinder unit that is known to churn out 24.3 bhp of maximum power. The transmission will remain the same as found on the Himalayan. Also, Scram is most likely to ride on a smaller 19-inch front wheel, as opposed to the Himalayan's 21-inch unit. The rear wheel, however, will remain the same 17-inch spoke wheel.

When launched, the Scram 411 is likely to be priced somewhere around ₹1.90 lakh (ex-showroom). Other potential launches from Royal Enfield this year may include Hunter 350 or Shotgun 650 (SG650).