Royal Enfield may bid adieu to 500cc bikes from early 2020

In production for nearly three decades, these motorcycles are offered under the Classic, Thunderbird and Bullet brands.
By : Amit Panday
| Updated on: 21 Nov 2019, 02:29 PM 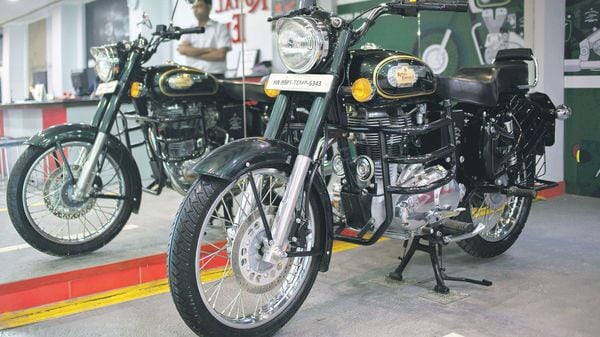 The 500cc Bullet could be one of the bikes to be discontinued.

In production for nearly three decades, these motorcycles are offered under the Classic, Thunderbird and Bullet brands.

Implementation of the new Bharat Stage VI norms will make production of these motorcycles unviable for the domestic market due to the high cost of upgrading their engines and low volumes, four people aware of the matter said. The company will instead upgrade its 350cc range of motorcycles, which continue to garner robust demand, the people said, requesting anonymity.

“The push rod architecture of the existing 350cc and 500cc engines do not meet the stringent emission norms. As a result, the existing model lineup will be phased out," said one of the four people.

“Royal Enfield plans to restore the 350cc segment with an all-new powertrain as that accounts for the bulk of sales. Meanwhile, it would quit the 500cc displacement," the person added.

The fate of the 500cc motorcycles will be similar to that of some cars such as Maruti Suzuki India Ltd’s Gypsy and Omni, Hyundai Motor Co.’s Eon, and Tata Motors Ltd’s Safari Storme and Sumo which are being discontinued as India moves to implement stricter safety and emission norms from October 2019 and April 2020 respectively. Makers of these models have discovered that the cost of upgrading them would be uneconomical, given their weak demand.

Initially made for export markets, demand for 500cc motorcycle brands picked up pace in India only after they were re-launched in 2009 using a new lightweight unit construction engine platform.

Responding to queries from Mint, a Royal Enfield spokesperson said that the company is “well on track to migrate to the BS VI norms as mandated by the government".

“We will transition this along with the rest of the portfolio by the mandated time frame. All our products are future-proof. While we do not comment on speculative news and product pipeline, we will make the announcements in a timely manner," the spokesperson said.

“The 500cc motorcycles had the same look and feel as compared to their 350cc variants. More importantly, the 500cc bikes came at a much higher price, which along with several technical issues did not attract buyers on a similar scale," said Chirag Jain, an analyst at SBICAP Securities Ltd, citing the primary reason behind the sluggish response.

Specific 500cc models, however, continued to fetch bookings from young and old brand loyalists and aspirants despite the comparatively higher price tag. In July last year, the company reported that 250 units of the limited edition Classic 500 Pegasus, which was inspired by the World War II model Royal Enfield Flying Flea, were sold out in less than three minutes in an online flash sale. As its most expensive offering, each unit was priced at ₹2.4 lakh (on-road, Delhi).

On the exports front too, 500cc Royal Enfield motorcycles did not fetch anticipated sales volume, said the second person cited above. In FY19, the company exported 12,594 units of the 500cc model.

“The twin-cylinder, 650cc motorcycles – Interceptor and Continental GT – were designed and developed primarily for the export markets. Secondly, the intent of launching the new 650cc bikes was also to upgrade the existing pool of Royal Enfield riders in the domestic market. As the 500cc line-up will be discontinued, the 650cc Twins will become the company’s export volume drivers," said the second person.

“Royal Enfield’s plan to discontinue 500cc models would not negatively impact the brand," said Aditya Jhawar, an analyst at Investec Capital Services India Pvt. Ltd, adding that the 650cc models do not suffer from the typical quality related issues of the 500cc.