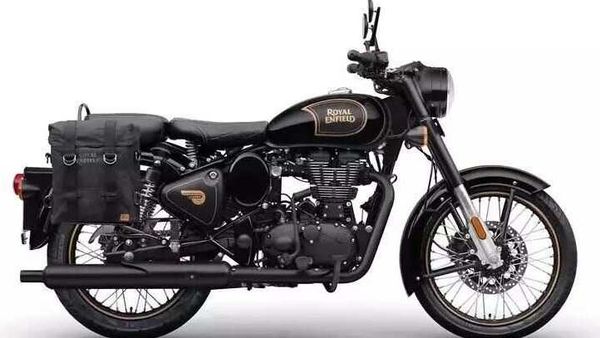 While Royal Enfield has already pulled down its 500 cc line-up from the Indian portfolio, these bikes still have some demand in the markets outside India, especially in Europe.

The company has now launched the new Classic 500 Tribute Edition in the UK market. The bike has been priced at GBP 5,499 which converts to ₹5.38 lakh. Apart from the UK market, the bike has also been made available in several other markets across the world.

It is a limited-edition model which is restricted to just 1000 units, out of which 210 units have been reserved for the UK. It is a final send off to the Royal Enfield’s 500 cc era.

In order to make the Classic 500 Tribute Edition more appealing, it has been given a unique paint scheme with a two-tone matte black and gloss black colour. The bike also sports gold pinstriping on the body panels and wheels. In addition to the new paint scheme, the bike is also being offered with accessories which include canvas panniers with mounting racks, touring mirrors, pillion seat and machined oil filler cap. The bike also comes with a unique numbered plaque over the battery box.

Apart from the exterior styling updates, there is no other significant change on the bike. It is plonked with the same 499 cc, single-cylinder unit that's known to produce 27.2 PS of power and 41.3 Nm of peak torque.

The suspension kit on the limited-spec Classic 500 includes telescopic front forks and dual-shocks at the rear. It features disc brakes at both ends which work in conjunction with dual-channel ABS for added safety.

For the record, the Classic 500 Tribute Black Edition was also on sale in India until February 2020.