Pawan Munjal, Chairman of Hero MotoCorp, was seen standing next to the new electric scooter, which will be launched soon for the Indian market, during the two-wheeler manufacturer's tenth anniversary celebrations.
By : HT Auto Desk
| Updated on: 10 Aug 2021, 08:55 AM 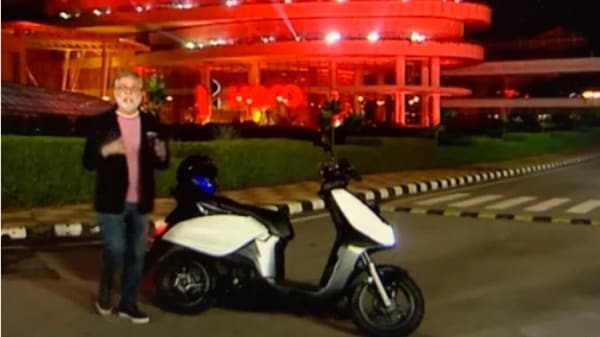 Pawan Munjal, Chairman of Hero MotoCorp, was seen standing next to the new electric scooter, which will be launched soon for the Indian market.

Hero MotoCorp has showcased the first look at its upcoming electric scooter. The world's largest two-wheeler manufacturer, which celebrated its tenth anniversary on Monday, seems ready to bring in its first electric model for the Indian market soon.

Pawan Munjal, Chairman of Hero MotoCorp, was seen standing next to the new electric scooter during the company’s livestream event of its ten-year celebrations.

Hero MotoCorp or Pawan Munjal did not share much detail about the upcoming electric scooter. However, during the event, Munjal said that it is expected to be unveiled soon.

In April this year, Hero MotoCorp had signed an agreement with Taiwanese company Gogoro to share battery swap and technology features. The design of the new electric scooter does not reflect what Gogoro offers. Instead there are certain elements, like the single-sided swingarm, which has similarities with the Bajaj Chetak.

Hero MotoCorp's latest teaser comes only days before one of the most anticipated electric two-wheeler launch from Ola Electric. Besides Ola, Hero's new electric scooter will compete with Bajaj Chetak electric, Ather 450X and TVS iQube among others when launched.

The Hero MotoCorp electric scooter is likely to go on sale later this year or early next year.