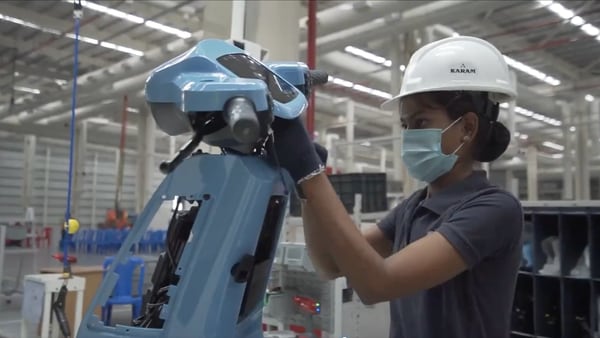 One of the Ola Electric employees seen at the EV maker's assembly line at its facility Futurefactory near Chennai, developing the S1 and S1 Pro electric scooters.

Ola Electric aims to take the lead in turning India into a EV hub in future. Bhavish Aggarwal, CEO at Ola Electric, made the EV startup's ambitions clear during a conference held today.

"Our ambitions in electrification are to make India the global electric vehicle hub," Ola Electric CEO was quoted by news agency Reuters as saying during Reuters Next conference.

Going beyond electric two-wheelers, Ola Electric has already expressed its ambition to step in to the electric four-wheeler segment. The EV startup, backed by Japan's Softbank Group, aims to put its first electric car on Indian roads by 2023. Ola is also planning to raise up to $1 billion through an initial public offering (IPO) in the next few months.

Ola Electric is currently busy manufacturing its electric scooters from its facility called Futurefactory which is located in Tamil Nadu. Spread across 500 acres of space, the Ola Futurefactory promises to roll out 20 lakh electric scooters every year in the initial phase. The facility was built within a record of six months and it employs women-only workforce of around 10,000.