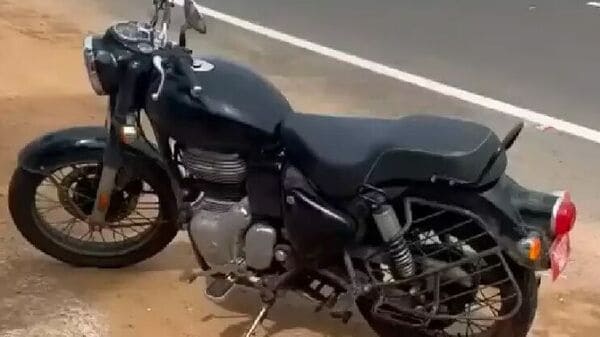 While Royal Enfield prepares for the launch of the Hunter 350 next month, the company's upcoming new-gen Bullet 350 has now been spotted undisguised indicating that it could be next in the pipeline right after the Hunter 350 which goes on sale in India in August second week. The all-new Bullet has now been snapped in a clear image revealing crucial details of the upcoming model.

The spy image suggests that Royal Enfield has successfully retained the retro styling treatment on the motorcycle. While the majority of the exterior design remains more or less the same, what has clearly changed is the tweaked front fender, new tail lamp, and the tank design which now doesn't incorporate tank pads. However, the majority of the exterior profile remains as its predecessor and it also carries forward the iconic spoke wheels design too. Moreover, it will also get the same instrument console consisting of an analogue dial with two smaller dials, this format appears to be similar to the Classic 350 motorcycle.

While the exterior appearance will remain majorly unchanged, significant changes will be found on the inside as the bike will be underpinned by the new platform and engine, sourced from the Meteor 350 motorcycle. It will use the same J-platform, featuring 348 cc, single-cylinder engine. The powertrain is currently seen on the Classic 350 and Meteor 350 bikes. The output from this engine is also likely to remain unchanged, as the company might not bother tuning this engine. The transmission will also remain the same 5-speed unit.

The Bullet 350 has remained the entry-level motorcycle from Royal Enfield in India for a long time now, the new model is likely to carry forward this legacy.