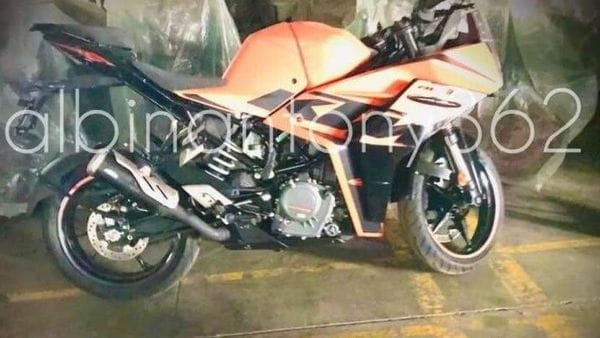 The new-gen RC390 will be fully updated from the inside out. Image Courtesy: Instagram/albinantony362

KTM's upcoming RC390 sportsbike has been spotted completely undisguised ahead of its global debut later this year. The latest spy image also throws light on the exterior paint scheme of the bike that will be seen on the production-spec model bound to go on sale in India.

The new-gen RC 390 will be fully updated from the inside out. There will be a new bigger headlamp at the front, which will replace the twin-beam LED lamp found previously. Also, the side body firing will be all-new, aimed to give the bike a refreshed, sharper look.

Hawk-eye readers will note the split design on the fuel tank of the new-gen RC390 that isn't found on the existing unit. Also, the seats, as well as tail section design will be all-new, along with refreshed sticker seats. Other tweaks to the exteriors of the RC390 will include new rear grab rails and a side-mounted exhaust system.

Expect the new RC390 to get the same 373.2cc, single-cylinder, liquid-cooled fuel-injected engine as found on the existing model. This engine produces 42 bhp of maximum power and 35 Nm of peak torque. The engine will come mated to a 6-speed transmission featuring a slipper clutch.

Other updates on the new bike include a new electronics package, updated instrument cluster, possibly a TFT colour display, and redesigned turn indicators among other features.

Meanwhile, KTM has also taken down the current-gen RC390 model from its official (India) website which only lists the other two bikes in the RC range - RC 200 and the RC 125. The discontinuation from the official website is a clear indication that it will soon be replaced by the upcoming bike.