New Ducati Hypermotard 950 is already available for purchase in the international market.The new Hypermotard 950 will be compliant with the latest Euro5 emission norms.
By : HT Auto Desk
| Updated on: 02 Nov 2021, 04:06 PM 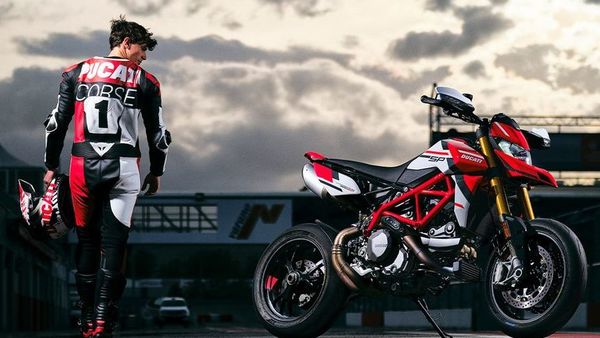 New Hypermotard 950 is available for purchase in the international market.

Ducati India has teased the new Hypermotard 950 BS 6 motorcycle ahead of its official launch. The company has rolled out a new teaser image hinting that the bike will be launched anytime soon now. The new Hypermotard 950 will be the next big launch by Ducati in India after the updated 2021 Monster.

The new Hypermotard 950 will be compliant with the latest Euro5 emission norms. It will feature a 937cc Ducati Testastretta 11-degree V-twin-cylinder, liquid-cooled engine with a six-speed gearbox. The output from the engine stands at 112.4bhp of maximum power at 9,000rpm and 96Nm of peak torque at 7,250rpm.

Some of the key styling highlights of the model will include a twin under-seat exhaust setup, minimal bodywork, a flat seat, a trellis frame, a trellis sub-frame, a wide handlebar, knuckleguard-integrated LED blinkers, and 17-inch wheels.