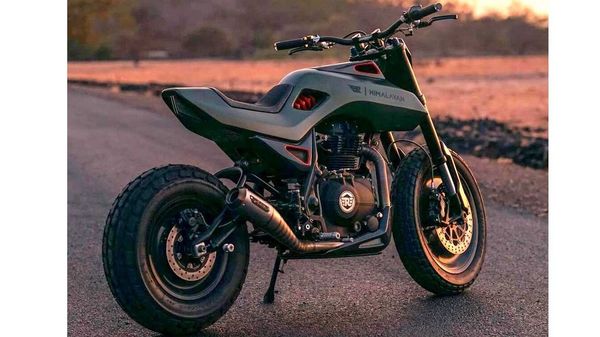 Modifications carried over the base bike are so heavy that it is nearly impossible to be recognised as the Himalayan. (Image Credits: Smoked Garage)

Royal Enfield Himalayan is gaining a reputation among the custom bike builders these days. There have been several really intimidating custom projects pulled off on the Himalayan in the past, and now images of a new modified Himalayan named SG 411 are taking the internet by storm.

Smoked Garage, a bike custom house based out of Jakarta, Indonesia, has come up with the SG 411 which is a Himalayan underneath its alien-looking skin. Some rather heavy mods have been carried over the base bike. For example, there is a completely new swingarm that supports a new rear monoshock suspension placed below the tank, a very unconventional position for the rear spring, to say the least. The monoshock comes dipped in red and peeks out from the window cut embedded in the side body panel. Spoke wheels have been swapped with different units which make the bike more muscular. In fact, modifications carried over the base bike are so heavy that it is nearly impossible to be recognised as the Himalayan.

Changes to the rear subframe are also visible which have been introduced to accommodate a completely new tail section. The rear pillion seat is now nowhere to be found, thus the SG 411 can accommodate only one person at a time. Moreover, the stock meter has been given a miss, also USD front forks have been used to make the front appear more muscular. There is also a new aftermarket free-flow exhaust which gels well with the overall look of the bike.

The powertrain, as visible, remains the same 411 cc single-cylinder engine churning out 24.31 PS of power at 6,500 rpm and 32 Nm of peak torque. There have been no mechanical updates done to the engine in order to boost the powertrain performance.