List of bikes Royal Enfield is likely to launch in FY22

Royal Enfield will make use of the Meteor 350's platform to launch a range of new models in the near future.The company has committed to a maximum number of launches this fiscal year.It has also filed patents for several new motorcycle names in India.
By : HT Auto Desk
| Updated on: 11 Jun 2021, 02:38 PM 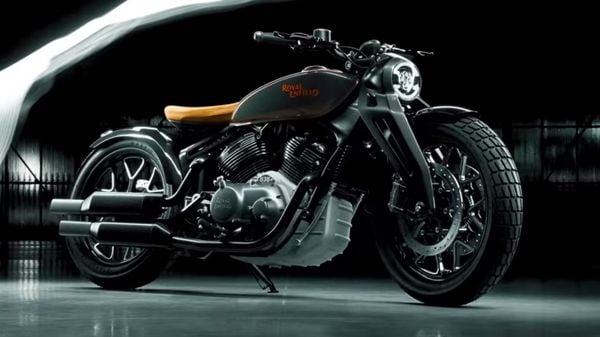 Royal Enfield is planning to introduce a range of new motorcycles in India and overseas this fiscal. In fact, the company has also announced that FY22 is going to be marked as a very significant period for Royal Enfield as it will launch a maximum number of bikes this fiscal.

In a recent interaction with analysts, Royal Enfield CEO Vinod Dasari announced, "We have a very exciting (product) pipeline. This year will probably see the highest number of new models that are seen from Royal Enfield in a year. And that is just the beginning of the pipeline."

While there was no specific announcement regarding which models will be launched this fiscal, the company did mention some 'very big models coming in' this year. "We will continue to have one new model every quarter. Because there is a delay due to COVID right now, I don't think we will squeeze everything in but there are some very big models coming in. We are very excited about it. We will have to do all the marketing and market preparedness for that," Dasari added.

It is no news that the Classic 350 is headed for launch very soon. It is probably going to be the most immediate launch from Royal Enfield in India. The bike has been spotted getting tested on several occasions and almost all the major details on this upcoming Royal Enfield are already known.

Royal Enfield has been seen testing a 350 cc, scrambler-oriented bike for quite some time now. While the official name of the motorcycle is yet to be confirmed, it is likely to be called the Hunter 350 as the company has filed a patent for this name among others in the list.

The Chennai-based retro bike maker may also launch a motorcycle named Shotgun in the Indian market by late-2021 or early next year. Interestingly, the company is testing a mid-displacement parallel-twin laid-back cruiser which may be named Shotgun 650. Though, the official information on its name is yet to be confirmed. It will be based on the same platform as the existing Continental GT 650 and Interceptor INT 650 bikes.

Apart from the names mentioned above, Royal Enfield has registered some more nameplates such as Sherpa, Roadster, and more recently - Scram. Though, patents don't necessarily mean that they will be used for an upcoming product but there is always a chance.