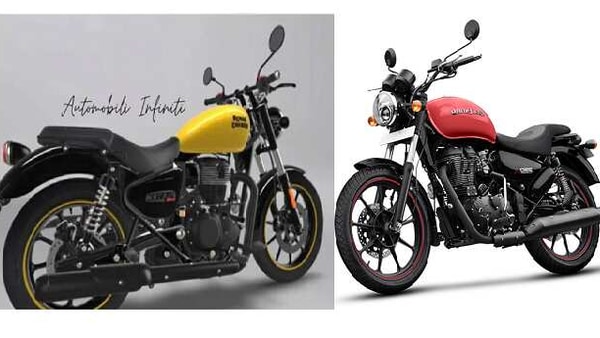 Previously, the first images of the upcoming Royal Enfield Meteor 350 Fireball were leaked online which hinted that the bike is very close to its launch date. Along with the exterior design details, the leaks were also sufficient to reveal a number of mechanical changes expected inside the new bike.

The images were snapped from the company's online motorcycle configurator which were later taken down for obvious reasons. The Meteor 350 will be direct replacement to the Thunderbird 350X.

Starting from the looks of it, the new Meteor 350 gets some very prominent design tweaks against the model it replaces. It features a completely new rear-end design, a restyled tank and side panels. Also the fender has been chopped shorter and the indicator/brake lamp units have been given a different styling along with repositioning.

The fuel-cap is now no longer offset and has been placed right in the centre. Also new is the alloy wheel design. Instead of the simple straight spokes it boasts Y-shaped spokes.

It will also feature an updated double-cradle chassis and which will enable a slightly more cruiser-style riding position. When looked upon closely, the foot pegs positioning has been pushed slightly forward by about two or three inches to provide more comfort during long rides. Also, chain/sprockets, discs/calipers have switched sides.

Other major changes include missing kick-starter, more compact gearbox, exhaust pipe, and different covers that hide the throttle body, all these tweaks clearly suggest that it will most likely get an updated engine.

The online configurator also hinted that the RE Meteor 350 will be priced at ₹1,68,550 (ex-showroom), this also includes some accessories. But nothing is confirmed until the pricing is announced officially. For the record, the Thunderbird 350X costs ₹1.63 lakh (ex-showroom).