The new Royal Enfield Himalayan was launched in the Indian market earlier in 2021.Royal Enfield announced the commencement of operations in Japan earlier this year.
By : HT Auto Desk
| Updated on: 16 Dec 2021, 20:34 PM 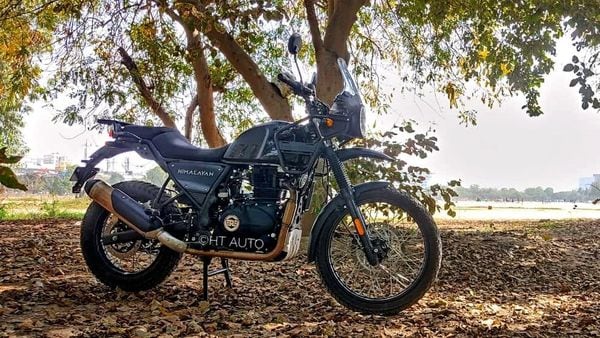 The updated 2021 Himalayan was introduced with some new features and a higher price tag which now crosses the ₹2 lakh barrier. (Image Credits: HT Auto/Prashant Singh)

Royal Enfield rolled out its popular Himalayan adventure motorcycle in the market of Japan. The new Himalayan has been introduced in the latest Euro 5 iteration along with the features such as Tripper Navigation pod, switchable ABS, and three new colours.

The company announced the commencement of operations in Japan earlier this year with the launch of the flagship store in Japan. Also, this move is being seen as a major step towards strengthening the company's presence in the market of the Asia-Pacific region. And the models such as the Himalayan as well as 650 Twins (Continental GT 650, Interceptor INT 650) are expected to help the company to boost its presence in the Japanese market.

The new Himalayan was launched in the Indian market earlier in 2021. The new ADV brought along minor cosmetic as well as feature updates. It was also given three new colour options in the form of Pine Green, Mirage Silver and Granite Black.

Some of the key tweaks for 2021 also included the Tripper Navigation pod, offering real-time navigation, and built with Google Maps platform.

The suspension kit on the model includes 41 mm front telescopic forks with 200 mm travel at the front along with a monoshock with 180 mm travel at the back. The braking duties are performed by disc brake on the front/rear wheel with a dual-channel anti-lock braking system (ABS).