Honda Activa has ruled Indian roads for several years now. And by quite a distance. The sixth-generation Activa now hopes to increase the gap at a time when rivals too are threatening to up their game.
By : Amit Chaturvedi
| Updated on: 25 Feb 2020, 13:05 PM 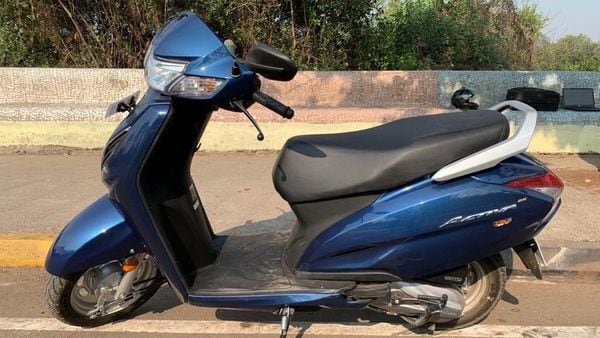 Ruling like a regal monarch in a hotly contested two-wheeler segment in India requires a whole lot of poise and character. And the Activa from Honda has had ample doses of both. Since its launch about 20 years ago, the enormously popular scooter has been a firm favourite and in its latest version, is determined to keep the crown firmly in grasp.

The sixth-generation Activa, launched by Honda Motor Company recently, promises to give riders an even more comfortable ride, better fuel economy and, according to the company, poise and character to set a new benchmark in the two-wheeler market. Not much has changed in the looks department of the new Activa but what has is noteworthy. It continues to have the same frame as its predecessors but what makes it stand out is a metal frame that has replaced plastic and fibre elements. The metal body adds to the strength, making the vehicle more durable and generously adding shine to the body. Cosmetic changes include a huge chrome garnish at the front while the LED headlights with DRL strips add to the visual appeal.

Honda has replaced the front wheel with a bigger 12-inch tyre to give the Activa a bolder road presence. The rear wheel continues to be the familiar 10-incher.

As always, the 110 cc engine is peppy and packed with power. Now, however, it gives the Activa better pickup and carries through the mid-range nicely. But the speed maxes out at 80 kmph, though the speedometer has markings till above 100 kmph.

The biggest change that Honda has introduced in the new Activa is that it now starts silently. The ACG motor gives the vehicle a jump-free start. The technology has been patented by Honda and comes as a nice addition to a vehicle used by scores of commuters in the country.

Another, and a much-needed, change brought in by Honda in the new Activa is that the fuel tank lid is not under the seat. It is outside, under a cover, which is opened by a switch provided near the start/stop mechanism at the front. The key mechanism used to start the vehicle now has an additional mode - seat/fuel. The rider has to move the key to that mode, press the switch - down for opening the seat and up for fuel lid - and the lock will pop open.

Honda thought about ditching the under seat fuel lid pretty late; its competitors have been providing an external fuel lid for years.

The under-seat storage space is more or less same, but it has a first-aid kit and a toolkit. But there is no charging point or glove box at the front - another area which the competitors have started paying attention to.

The Activa now comes with a BS 6 engine as per the strict pollution control norms announced by the government which will kick in from April 1 this year. This means that the scooter will now give a better mileage. The company claims the mileage to be somewhere between 55-60 kmpl.

An upgraded engine also means that you will have to shell out more to buy the new Activa. The ex-showroom price (in Delhi) of the new Honda scooter is around ₹64,000 which is about ₹7,000 costlier that it’s predecessor.

A higher price gives you better safety features and ride quality. The Activa now uses telescopic suspension, only seen in motorcycles up until now. The new suspension makes it easier to navigate the scooter on a bumpy road. The seat cushion is also softer to make those long hours of traffic jam comparatively less taxing. The length of the seat is also pretty good - two people won't complain about much even on slightly longer rides.

So, does the new Activa have what it takes to lead the pack?

The new Activa is a great product which offers a futuristic design, better mileage and most of the bells and whistles. But Honda has still not given it the utilities which are now common in the segment. And at the Auto Expo, some of the rivals showcased technological enhancements and safety features which make a two-wheeler almost comparable to a four-wheeler. It is disappointing to note that Honda did not think about adding these features in one of its best-selling products.

Activa is almost surely expected to continue as a strong performer but with rivals upping their game, the future may not be as generous to the undisputed leader of the Indian two-wheeler segment.