Matt Levatich had been wrestling with several headwinds as CEO, including an ageing customer base in the US, its biggest market, and heightened tariff costs from President Donald Trump’s trade wars.
By :
| Updated on: 02 Mar 2020, 11:55 AM 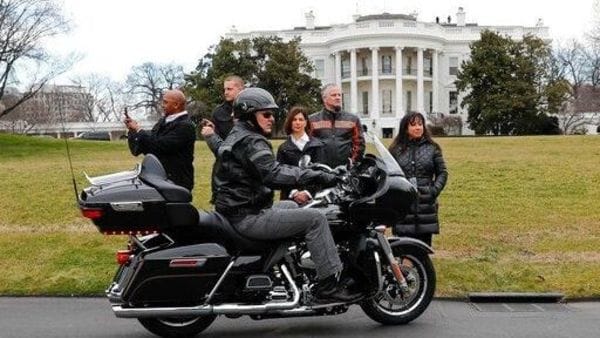 File photo: Harley Davidson President and CEO Matthew S Levatich rides his motorcycle onto the South Lawn of the White House in Washington before a meeting with President Donald Trump and Vice President Mike Pence.

Harley-Davidson Inc. is starting the week in search of a new boss, seeking someone who can stem years of declining sales at the iconic American motorcycle maker just as it’s starting to roll out some new products.

Chief Executive Officer Matt Levatich unexpectedly stepped down Friday, parting ways with the board after a 26-year career at Harley-Davidson -- including five years as CEO in which the company lost more than half its market value. Board member Jochen Zeitz will fill the job for now, the company said after the close of business Feb. 28.

Harley shares rose as much as 5% to $32.06 in after-hours trading following the news, suggesting investors were ready for a change at the Milwaukee-based manufacturer.

“An external hire that can look at the business with fresh and critical eyes is needed," Joseph Spak, analyst at RBC Capital Markets, wrote in a note to investors. That said, “the stock could be in limbo until a new, permanent CEO is named."

Levatich had been wrestling with several headwinds as CEO, including an aging customer base in the U.S., its biggest market, and heightened tariff costs from President Donald Trump’s trade wars. Harley’s first electric motorcycle, LiveWire, won positive reviews but has yet to kickstart sales or help it achieve greater market share abroad.

Harley was caught flat-footed by competition from more affordable, lightweight bikes as heavy motorcycles like the one Marlon Brando rode in the movie “The Wild One" went out of style, said David MacGregor, an analyst at Longbow Research in Independence, Ohio.

“They’re finally figuring it out, but they’re three years behind the curve," he said by phone. “The board members and investors were just not willing to wait."

The new CEO would come aboard as Harley is entering new segments with less expensive middleweight bikes, small displacement motorcycles for Asia, and a slew of electric bikes. It’s also been trying everything from tweaking its iconic logo to acquiring a kids e-bike company to attract younger riders.

Even with the years long slump in sales, “we are surprised by the timing of the leadership change ahead of major new product launches scheduled over the next few years," analysts Sharon Zackfia and Tania Anderson of William Blair & Co., wrote in a note.

Harley’s shares have plunged 18% this year, and its $4.6 billion market capitalization is down by more than half from when Levatich took over.

U.S. sales dropped for a fifth straight year in 2019. That period covers most of Levatich’s tenure as CEO, which began in May 2015. Retail sales in the U.S. have risen only once in the past 21 quarters. That inability to spur growth presaged an earnings miss when Harley reported its latest quarterly profits in January.

As recently as last month, Levatich expressed confidence the company was on the road to recovery. “Our return to growth is not in the distance -- it’s right around the corner, and 2020 is our pivotal year," the CEO told investors on a Jan. 28 earnings call.

Levatich’s departure comes after the company moved in January to grant long-term shareholders the power to directly nominate board members, a concession meant to boost investor influence.

Harley’s effort to investing in new products to appeal to a younger demographic has added pressure to margins. To help find younger buyers, Levatich hired the company’s first-ever brand president last April, only to dismiss him six months later, citing unspecified conduct that didn’t align with its corporate culture.

The stock staged a recovery in late 2016 when a new engine briefly boosted U.S. sales volumes and Levatich, 55, announced a restructuring plan designed to save the company millions. But the boom proved short-lived.

“They had it, they lost it, they got it back and lost it again," said Ken Harris, co-founder of Cadent Consulting Group, a Chicago-based marketing and sales consulting firm. “When people aged out, they had no one to replace those buyers."

“A millennial would rather have a powered scooter than a Harley Davidson," Harris said. “I’m not surprised that they had to make a change."

Levatich’s tenure came at a time when many manufacturers were tested by mounting tensions between the U.S. and its biggest trading partners. The Harley CEO went from being one of the first company leaders to be welcomed to the White House in early 2017 to contending with angry tweets about closing a U.S. factory and adding production overseas to avoid tariffs.

Those extra costs dented profits at the company, which had pinned its near-term turnaround hopes on growth in international markets. After Harley announced in June 2018 that it would shift some production out of the U.S. to sidestep tariffs imposed by the European Union in retaliation for U.S. levies on imported aluminum and steel, President Trump attacked the company for months -- even threatening to back a boycott of the company’s bikes.

Harley went ahead with plans to ship motorcycles to Europe and China from a new factory in Thailand, which allowed it to mitigate almost all of a $100 million cost burden from the tariffs on U.S.-made bikes. This was part of an effort to get half of its revenue from outside the U.S. by 2027, but that promised growth hasn’t come fast enough to offset the drag from the steady decline in sales in its home market.

Levatich’s acting replacement, Zeitz, who’s been on Harley’s board since 2007, was named chairman as part of the reshuffling announced Friday. The company said he will remain in that role “once a new CEO is appointed" as a permanent replacement.

Zeitz was the youngest executive to head a German public company when he became CEO of sporting-goods maker Puma SE in 1993. The 56-year-old led the company for nearly 18 years, increasing sales about 15 times over his tenure.

He also is a philanthropist who collects African art, which is in the eponymous Zeitz Museum of Contemporary Art Africa in Cape Town, South Africa.