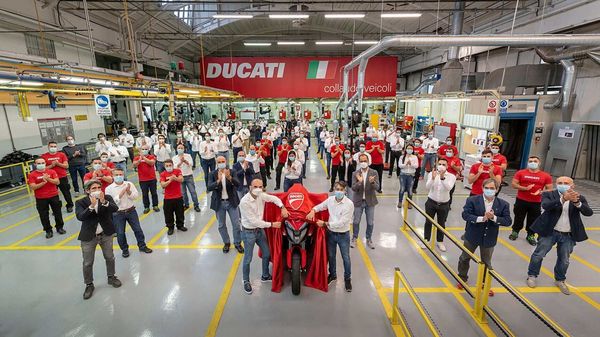 Ducati informs that the radar technology on the Multistrada will help prevent accidents and could be especially useful during long highway journeys.

Ducati recently announced it has started production of its Multistrada V4 motorcyle which is now the world's first bike to feature front as well as rear radar technology. The production of the bike has commenced at the Ducati factory in Borgo Panigale and will be officially presented to the world on November 4.

The integration of front and rear radar technology promises to make Ducati Multistrada V4 a step ahead of its rivals by offering a new level of comfort and ride assistance. Ducati states that the technology will be especially useful during long journeys on highways. The company informs that it has been eyeing radar-based systems since 2016 and it took it the following four years to develop it for Multistrada, along with Bosch.

Each radar has a compact dimension and weighs just 190 grams, and integrates to the bike seamlessly.

The radar positioned in the front of the vehicle controls the operation of the ACC (Adaptive Cruise Control), which by means of controlled braking and acceleration automatically adjusts the distance (selectable on four levels) from other vehicles when riding at a speed between 30 and 160 kmph. The rider can maintain constant control of the bike in any situation and for this, the authority of the system in terms of acceleration and deceleration has been limited.

The rear radar is able to detect and report vehicles positioned in a way to detect vehicles in the bike's blind spot, signalling to the rider if such a vehicle is approaching at high speeds.

Ducati states that the radar technology will offer unmatched safety to the rider and can possibly prevent accidents.

Powering the bike itself is a light and compact V4 engine which has been specifically designed to meet touring needs. Further details related to this engine will be officially revealed on October 15.