The new Ducati Multistrada V2 is lighter than its predecessor, comes with an updated V-Twin engine that can deliver 113 hp and 98 Nm of torque, and also gets improved gearbox and clutch besides other small changes.
By : HT Auto Desk
| Written By : Sabyasachi Dasgupta
| Updated on: 01 Oct 2021, 01:40 PM 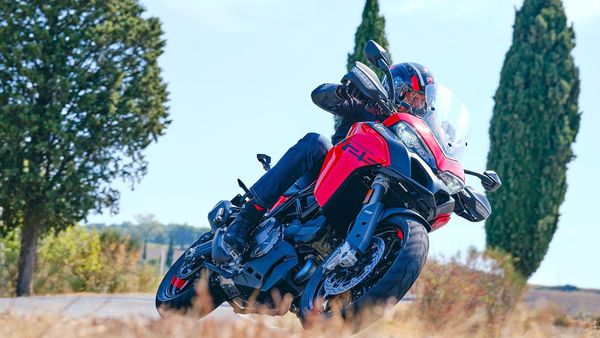 The new Ducati Multistrada V2 is the first in a series of planned premieres by the Italian brand. Basically, nothing has changed radically other than the name, which now matches the other mid-size bikes in the Ducati range.

In addition to the name, the key changes include an updated V-Twin engine that can deliver 113 hp and 98 Nm of torque. It also gets improved gearbox and clutch besides other small changes.

Another key change is that the bike is now lighter than the Multistrada 950. Ducati engineers have found a way to reduce the weight of the 937 cc Ducati Testastretta engine by around two kgs, while the total weight is reduced by five kgs. The standard Multistrada V2 model now weighs 221 kgs with a full tank of 24 litres. The Multistrada V2 S weighs slightly more at 225 kgs with all fluids.

Ducati will offer the new Multistrada V2 in two versions. The top-of-the-line Ducati Multistrada V2 S comes with a semi-active Skyhook suspension, a 5-inch LCD screen, up and down quickshifters, and illuminated steering wheel switches.

On both versions, the saddle height was lowered by 10 mm, and the saddle shape became narrower. The motorcycle should be more comfortable for people of short stature. In addition, there is an optional 790 mm saddle. For taller riders, the footpegs have been lowered by 10 mm, which means legroom hasn't changed.