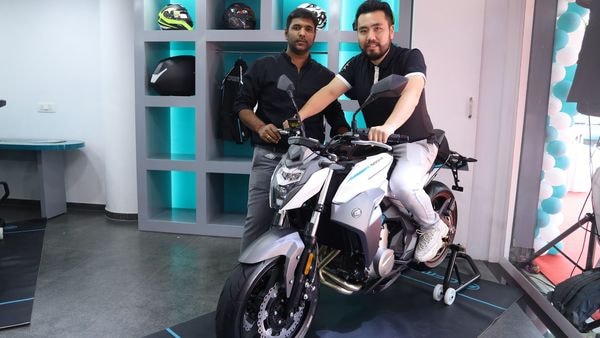 MUMBAI : Chinese motorcycle maker CFMoto is looking at selling 1,500 motorbikes in the first year of operations in the country.

The company, which opened its first showroom in the nearby Thane on Wednesday, had launched four models--300NK, 650NK, 650MT and the 650GT in July and began bookings in August since then it has received 700 bookings. The bikes come on 350-cc to 650-cc engines.

The company announced deliveries from Wednesday.

The bikes are designed in Austria and manufactured in China and those being sold in the country are brought in as completely knocked down units and are assembled in Bengaluru.

"In the first year of operations, our target is to sell around 1,500 bikes and double the volume in the second year," Vamsi Krishna Jagini, chief executive of Anvita AutoTech Works, which assembles the bikes for the Chinese firm, told PTI.

Established in 1989, CFMoto entered the domestic market last year with local partner AMW which later changed the name to Anvita Autotech Works, which runs a 10,000-units assembly line in Bengaluru.

CFMoto is aiming to source 50 percent from local vendors over the next 18 months. Eventually, except for the engines, almost all the key components will be sourced locally, he said.

The four models are priced between ₹2.29 lakh and ₹5.49 lakh, and Jagini defended the price tags saying this is at least ₹1.70 lakh lower than the competition, and it will become cheaper with localization.

Jagini said they plan to have seven showrooms by December and to have 50 dealerships by 2021.