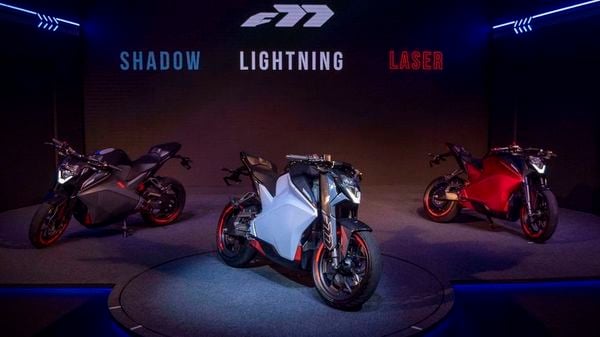 Ultraviolette Automotive, a Bengaluru-based start-up, has launched the Ultraviolette F77 electric motorcycle, its first product. The company states that the bike can go from stationary to 100 kmph in 7.5 seconds and has a range of up to 150 kilometers.

The Ultraviolette F77 has an an air-cooled brushless DC (BLDC) which produces 25kwh of power (33.5 bhp) and can reach a top speed of up to 147 kmph. It has three ride modes - Eco, Sport and Insane and its battery pack can be charged in about five hours using a standard charger. With a fast charger, the company says, the bike can power from zero to 80% in 50 minutes and zero to 100% in 90 minutes. The company states that the battery pack, the company calls it Modular Battery Technology, has seven international patents and that it has a shock proof covering. The battery pack was developed in-house. Additionally, the bike has customisable regenerative braking which adds to the charge into the battery.

The Ultraviolette F77 is being made available in three variants - F77 Lightning, F77 Shadow and F77 Laser - and is priced between ₹3 lakh and ₹3.25 lakh (on-road, Bengaluru). The company says the bike will first be made available only in Bengaluru before subsequent expansion takes place.