Batman to ride this new Batcycle in 'Flash' movie 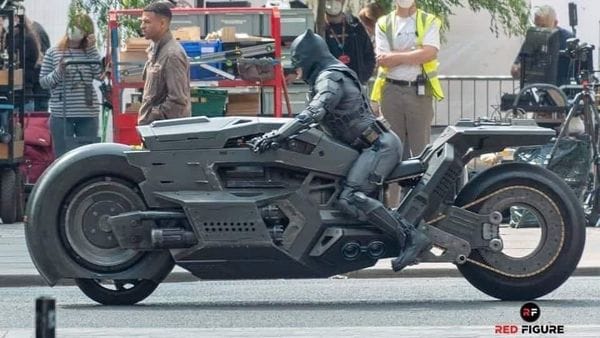 The front of this Batcycle is just a prop with a conventional smaller wheel beneath it. (Image: Autoevolution)

Comic superhero character Batman is not only about funky and exclusive gadgets. Batman is also about some stunning and super powerful vehicles as well. One such is the Batcycle that will be used by the superhero in the upcoming movie Flash. This Batcycle will be ridden by Bruce Wayne played by Ben Affleck in the movie.

(Also Read: This Mercedes-Maybach Concept could be Batman’s new ride in new movie)

The movie is currently being shot in Glasgow, Scotland. Several images have surfaced online from the shooting showing the Batcycle. The images show Batman riding the Batcycle. However, it is probably a stunt double of Ben Affleck.

Speaking about the Batcycle, it looks chunky and massive with its armour, equipped with various gadgets and weapons. Its front wheel is basically a prop and there is a functional wheel beneath it that is more traditional. There is a huge chain attached to the rear wheel. The main body frame of the vehicle stretches well beyond the handlebar. It also has a large hole right in the centre of the Batcycle.

The rear wheel is smaller than the faux front wheel. There is a large hollow at the centre of the rear wheel. The side-mounted machine gun barrels of Batcycle can be seen clearly in the images.

If Batcycle is not enough to ramp up the excitement about the upcoming movie, the 1989 Batmobile will make a comeback in this movie. This Batmobile was used by Michael Keaton in 1989's Batman and 1992's Batman Returns. It is one of the most iconic Batmobile of all time.

The Batcycle, Batblade, or Batpod is the personal motorcycle of the DC Comics superhero from Gotham City. The Batcycle is a modified street bike that is powered by a 786 cc liquid-cooled V4 engine. The vehicle gets a computer-controlled carburettor and bulletproof wind-guard as well. However, the wind guard is not visible in the latest Batcycle.