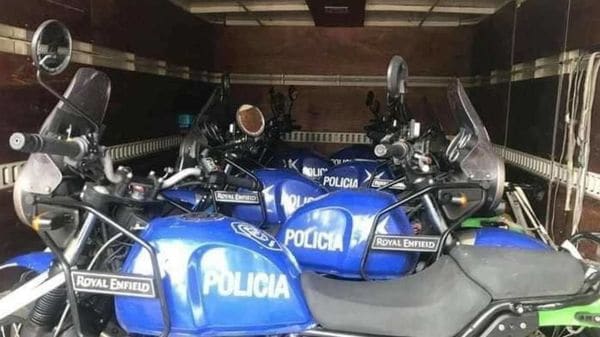 The Argentina Federal Police has added Royal Enfield Himalayan motorcycles to its fleet. The bikes come painted in blue and have been modified slightly as per the specific requirements of the police force. Apart from a special blue colour, the bikes get a PA system along with police lights. The number of Himalayan bikes added to the Argentinean police fleet isn't known at the moment.

Apart from minor cosmetic and accessory modifications, there seems to be no other special modification carried over on the bikes. The Himalayan sources power from a 411 cc single-cylinder, air-cooled engine featuring SOHC set up. In the Indian-spec model, this engine is responsible for delivering 24.3 bhp of power at 6500 rpm and 32 Nm of torque at 4000-4500 rpm. The transmission option is a 5-speed unit.

The units delivered to the Argentinean police force are most likely freshly made out of the RE's latest local assembly unit which was inaugurated a few days back. It is located in Campana, Buenos Aires. The company has partnered with Grupo Simpa for its local operations in Argentina. Grupo Simpa is RE's local distributor there.

Argentina is also the first country in RE's modern history which will assemble and produce RE bikes. The plant will be responsible for assembling three RE models: Himalayan, Interceptor 650 and the Continental GT 650.

Speaking about the announcement of the Argentinean facility, Mr. Vinod K Dasari, CEO, Royal Enfield, said, “With a strategic view to cater to growing demand and to gain significant market advantage, we have been pursuing our plans to set up local assembly units across specific markets in the Asia Pacific region and across South America. In the first of these, we are very happy to announce the first CKD assembly plant in Argentina."