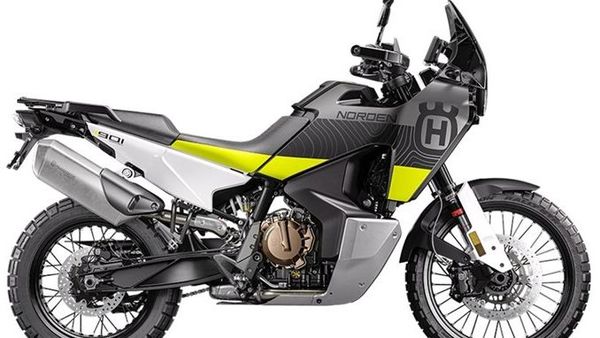 The 2022 Norden 901 appears to be almost the same as the concept version which first broke cover at the EICMA 2019.

Husqvarna has revealed the new Norden 901 adventure bike which comes heavily based on the pre-existing KTM 890 Adventure motorcycle.

The newly revealed Norden 901 adventure bike appears to be almost the same as the concept version which first broke cover at the EICMA 2019.

At the front, the motorcycle gets a fairly round headlamp which is a typical Husqvarna design. Above, there is a mid-sized tinted windshield placed which is available as an additional accessory. The LED position lights have been placed below the front headlamp that gives the front a nice touch.

Over the back, the new Norden 901 features a minimal tail section design that also features a provision for the luggage. The body panels on the new adventure bike comprise of flat and angular design that reminds of the KTM's rally bikes. Also, there is a nice interplay of colours which contributes to its distinctive Husqvarna identity.

The bike features a slung, 19-litres fuel tank, as also found on the popular adventure bikes from KTM. The company claims that the overall range of the bike is close to 400+km. The bike sports a seat height of 854 mm.

The motorcycle's suspension kit includes an adjustable 43mm WP Apex USD fork that features 220 mm travel at the front, along with a 215 mm rear travel. The wheel combination Husqvarna has opted for include a 21-inch front wheel and an 18-inch rear wheel. This comes shod with Pirelli Scorpion STR tyres.

At the heart of the Husqvarna Norden 901 sits an 889cc, DOHC, parallel-twin engine that produces 105hp of maximum power at 8,000rpm and 100Nm of peak torque at 6,500rpm. For the record, it is the same engine that powers the KTM 890 Adventure. This comes married to a 6-speed gearbox with an up/down quickshifter.

Some of the key rider electronic aids include cruise control, three ride modes – Street, Rain, and Off-road, along with an optional Explorer mode. The bike also comes with cornering ABS and traction control which is offered as standard. The bike comes with a 5.0-inch TFT display that offers Bluetooth connectivity.

Some of the key rivals to the bike include the KTM 890 adventure and the Triumph Tiger 900 GT and Rally.