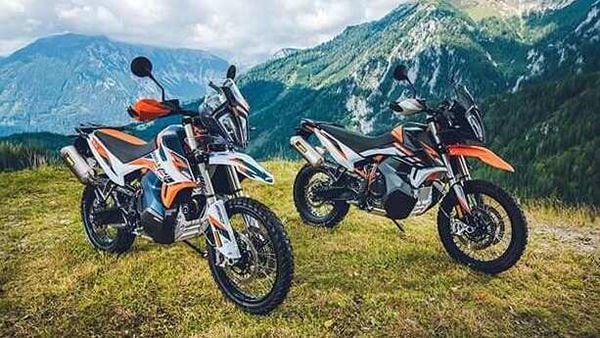 Both the adventure focused bikes share the styling cues from the KTM 790 Adventure.

KTM has revealed the new 890 Adventure R and the limited edition 890 Adventure Rally R in the international bike market. Both the adventure focused bikes share the styling cues from the KTM 790 Adventure.

For the uninitiated, this powertrain is basically a little modified version of the engine seen on the 890 Duke. As per the company, the engine features a crankshaft with 20% more rotating mass. The company has initiated this update for a 'more stable and consistent output'. KTM also claims that the engine delivers significantly more torque output in the lower rev band. The engine is also available with an optional quick-shifter on the 6-speed transmission.

The 890 Adventure R features a reinforced clutch and host of modern electronics including ABS, off-road ABS and traction control. It also gets a new dedicated switch on the handlebar for cruise control which is a standard functionality on both the bikes. It rolls on a 21-inch wheel up front and a 19-inch unit at the rear. The wheels are shod on with Metzeler Karoo 3 dual-sport tyres. The suspension setup on the Adventure R include 48 mm WP USD forks (front) with 239 mm of travel and a WP monoshock (rear) with the same 239 mm of travel.

The higher-spec 890 Adventure Rally R features WP XPLOR Pro suspension setup for improved off-road prowess. Also, it gets an Akrapovic exhaust system which is 35% lighter against the standard exhaust found on the Adventure R model. Both the bikes get a 5-inch full-colour TFT screen which comes with a host of informatics.

The India launch of both the bikes is highly unlikely.