Croatia’s Rimac Automobili took over the French supercar maker Bugatti in a deal with Porsche that is reported to be worth millions of euros.Volkswagen brand owns both Porsche and Bugatti.
By : HT Auto Desk
| Written By : Sabyasachi Dasgupta
| Updated on: 06 Jul 2021, 12:22 PM 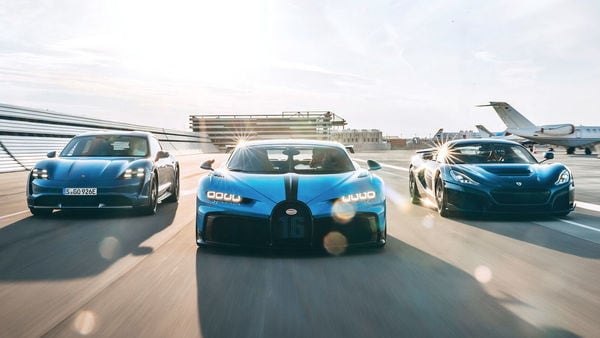 Volkswagen's Porsche and Rimac Automobili have signed a deal to launch a new joint venture where the Croatian electric supercar manufacturer will hold the majority stake in Bugatti. The French supercar maker will now be known as Bugatti Rimac.

The deal saw Volkswagen, the owner of Bugatti, transferring its shares in the supercar brand to Porsche. Rimac Automobili will have 55 percent ownership in the supercar brand, while 45 per cent will remain with Porsche. The formation of Bugatti Rimac is expected to formally take place towards the end of the year. It is still subject to the approval of antitrust authorities in several countries.

The development has taken place after Volkswagen's Chief Executive Officer Herbert Diess had stepped up efforts to increase funds for Audi and Porsche. Earlier, Porsche entered into a partnership with Rimac Automobili three years ago. Porsche increased its shares in the Croatian supercar manufacturing company and presently holds a 24 percent shares.

Oliver Blume, Chairman of the Executive Board at Porsche AG, said, "We are combining Bugatti's strong expertise in the hyper sports car business with Rimac's tremendous innovative strength in the highly promising field of electric mobility. Bugatti is contributing a tradition-rich brand, iconic products, unique quality standards and craftsmanship, a loyal customer base and a global dealer network to the joint venture. In addition to technology, Rimac is contributing new development and organizational approaches."

Mate Rimac, founder and CEO of Rimac Automobili, said, "This is a truly exciting moment in the short, yet rapidly expanding history of Rimac Automobili and this new venture takes things to a completely new level. I have always loved cars and can see at Bugatti where passion for cars can take you to. I can’t begin to tell you how excited I am by the potential of these two brands combining knowledge, technologies and values to create some truly special projects in the future."

Rimac Automobili was founded by Mate Rimac in 2009 as a one-man garage startup and came up with its first electric supercar Concept_One two years later. Apart from Porsche, investors in the company include Hyundai, Kia and Chinese battery maker Camel Group. Porsche, part of the Volkswagen Group, is also popular as one of the leading sports car manufacturer based in Stuttgart, Germany.

Bugatti was founded way back in 1909 at its headquarters in Molsheim, France. The supercar brand has been one of the most sought after for its expensive supercars ranging from Veyron, Chiron and La Voiture Noire. Bugatti used to sell around 80 cars every year and was one of the smallest brands within the Volkswagen Group.

Bugatti came up with the iconic 16-cylinder Veyron supercar, which was its first model after Volkswagen took over the company. However, the high development costs and low volumes quickly turned out to be one of the biggest money losers in the auto industry.