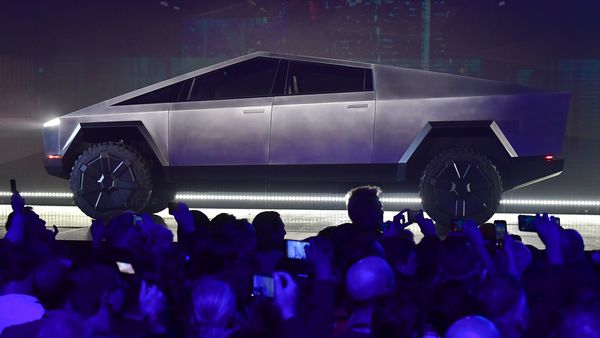 File photo from November of 2019 when Tesla first unveiled Cybertruck.

Tesla Cybertruck could well have a per-charge range to outlast most other electric vehicles on global roads. This after a new patent filing by Tesla has revealed, according to Electrek, that the upcoming Cybertruck could travel a maximum of 610 miles (around 980 kms) before requiring a charge.

Even if the range of 610 miles is in the most ideal drive conditions, with the right add ons, favourable weather and on perfect terrain, the Cybertruck could well be something to boast about as it munches mile after mile without the driver needing to hunt for a charging station. The 610-mile range on the patent filing is also significantly higher than the figure of 500 miles Tesla had claimed when the company had unveiled the Cybertruck for the first time back in November of 2019.

While it remains to be seen if the drive range seen on patent filings actually see the light of day and reality, there is much more to look forward to when it comes to the Tesla Cybertruck. CEO Elon Musk claims it will be the most capable pick-up truck ever and will boast of performance figures that could match sportscars. Tesla will also offer a long list of accessories and gadgets - including a retractable solar roof on the back bed - to make the EV more appealing to prospective buyers.

To be manufactured at the upcoming Tesla facility in Texas, the Cybertruck will start at $40,000 for the dual-motor version and $50,000 for the three-motor version. Deliveries were initially scheduled to start in US this year but timelines have now been pushed into the next year. And there are over one million reservations that Tesla has received so far for the next-gen electric pick-up.