The preference for manual versions of the GT3 in the US is about 70%, said Porsche spokesman.The omission is a consequence of the California Code of Regulations which states that manual vehicles must remain under a certain decibel level up to full throttle in second or third gear.
By : Bloomberg
| Updated on: 19 Jun 2021, 03:20 PM

On June 16, Porsche announced the 2022 Porsche 911 GT3 Touring. The 502-horsepower coupe is the understated version of the top-of-the-line GT3 that comes with a spoiler large enough for a picnic.

But the arrival of the new variant has also elicited an omission far more consequential: For the first time ever, Porsche will not offer a manual transmission in its most coveted 911s for drivers in its single biggest U.S. market. California will be the only state to not receive the 911 GT3 in manual form.

“The seven-speed PDK gearbox will be the only transmission offered in California with the 911 GT3," Porsche reported in a line buried at the end of the GT3 Touring press release. The decision had not been made public when Porsche debuted the GT3 earlier this year. “For those who prefer three pedals and are located outside of California, a six-speed manual gearbox will continue to be available at no extra cost."

Porsche is notoriously vague about how many allocations of its halo car are bought as manuals vs. PDK (automatic paddle shifting), but fans take the stick shift option very seriously. For them, a manual transmission is the sure-fire way to show that the person behind the wheel is a “serious" and accomplished driver ready to handle a GT3 car that’s tuned to dominate the track.

Globally, the take rate for manual versions of the GT3 is 30%; in the U.S., that number jumps to 70%, says Porsche spokesman Luke Vandezande. (That’s compared to less than a 10% take rate in some markets for manuals across all 911 variants.) Even Andreas Preuninger, the boss of Porsche’s 911 GT3 program, often uses the hashtag #savethemanuals on his personal social media posts. 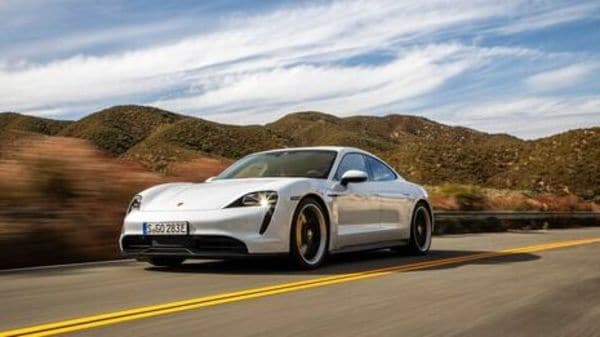 Porsche delivered 9,072 Taycans around the globe only 61 fewer than the long-running 911. (File photo)

Vandezande said in an email that the company is “unable to confirm whether a manual gearbox for the 911 GT3 in any form will be offered in California in the future," though he did confirm the manual transmission will not be offered on any of the the 2022 model year cars. And, in theory, he conceded, Beverly Hills Porsche could sell a manual GT3 if they knew it would be registered in another state.

The omission is due to the California Code of Regulations, which stipulates that highway vehicles must pass certain “drive-by" noise tests orchestrated by the Society of Automotive Engineers. Put simply, manual vehicles must remain under a certain decibel level up to full throttle in second or third gear. But an automatic transmission can hit the same speed requirements in first gear, which is far quieter.

Porsche’s quandary is exacerbated by the timing of current and upcoming noise regulations, which has left Porsche engineering the new GT3 to comply with upcoming standards while the old standards are still in effect—effectively relegating Porsche’s purposefully aggressive, racer-light, and screamingly loud GT3 manual cars to limbo.

“The issue is focused on an outdated test procedure still found in California Highway Patrol regulations - it’s called SAE J1470 and it dates back to 1992 when manual cars might have four or five gears," Vandezande explained via email. “It’s since been superseded by a new and more modern procedure called SAE J2805 from May 2020. The former test is no longer current (and this is the one the 911 GT3 would not pass), and the latter test has not yet been adopted by California – meaning we’re somewhere in the middle and therefore cannot register the car in manual form in California right now."

By contrast, the new entry-level 911 offers a different, seven-speed manual gearbox that complies with the California code; the manual version of the Porsche Speedster, which shares the same engine as the GT3, also complies with the code. Porsche considered making a “California edition of the GT3 but ultimately decided against it, Vandezande said. “We considered this option, but to alter a 911 GT3 would not be the right course of action."

The news comes during a heady time for Porsche, which is the top-earning brand for Volkswagen Group. Germany’s 73-year-old automaker has seen record sales in recent years, down just 3% during the pandemic in 2020, compared to the record set in 2019, and well up compared to previous years. In the first quarter of 2021, Porsche sales were up 36% year-over-year, to 71,986 units sold globally.

But this constitutes the latest evidence that manual gearboxes, which used to signify the brand’s commitment to its racing heritage—and among Porsche’s faithful adherents, distinguish between a “real driver" and a dilettante—have largely fallen out of the conversation. Quieter models are unlikely to affect the bottom line of a brand pivoting away from the die-hard driver mentality that still bolsters its image. Last year in the U.S., Porsche sold 18,631 Macan and 18,092 Cayenne SUVs, compared to just 8,840 911s. It’s an SUV company now.

Company executives have worked hard to emphasize the importance of seamless technology between car and owner, the luxury of its hugely profitable PDK-only SUVs, and the futuristic prowess of the electric Taycan. The gear-less plug-in sedan and wagon is the essential prime mover in the automaker’s €1 billion ($1.2 billion) shift to EVs; in the first quarter of 2021, Porsche delivered 9,072 Taycans around the globe—just 61 fewer than the long-running 911.