The Taycan Turbo S performed the lap at The Bend Motorsport Park in South Australia, the second-longest permanent racing circuit in the world.This is the first fully electric sports car by Porsche that made its debut in 2019.
By : HT Auto Desk
| Updated on: 14 Jun 2021, 02:10 PM 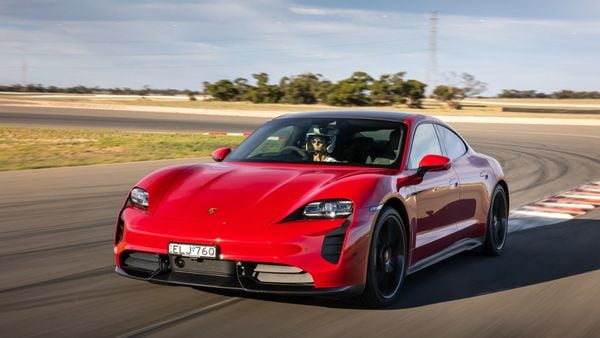 The Porsche Taycan Turbo S has become the first electric car to set a new EV production car record at The Bend Motorsport Park in South Australia. It has set a record time of 3:30.344 on the 7.7-kilometre GT Circuit layout which the second-longest permanent racing circuit in the world behind the Nürburgring Nordschleife in Germany.

Former Bathurst 1000 winner and Porsche track experience chief driving instructor Luke Youlden was behind the wheel when Taycan Turbo achieved this feat. “The lap time of the Taycan just absolutely blew me away," said Youlden. He added that one can drive the EV in a way similar to any other Porsche sports car. “The turn-in, handling and acceleration were outstanding. The power out of the corners is definitely where it makes up a lot of time," also said Youlden.

To set things into perspective in terms of performance and speed, Youlden also drove the new 911 Turbo around the 35-corner circuit on the same day which recorded a lap time of 3:22.066. Just eight seconds behind, Porsche Taycan EV shows its ability to take on conventional cars.

This EV is the first fully electric sports car by Porsche which went global in 2019. The four-door sports saloon can generate power up to 750 hp and 1,050 Nm of torque over boost power in combination with launch control. It has a range of 412 kilometres and can sprint from zero to 100 km/h in 2.8 seconds. It is an all-wheel-drive model with a top speed of is 260 km/h. Porsche has said that Taycan Turbo S and Taycan Turbo are among the most powerful production models that the sports car manufacturer currently has in its product range.