General Motors' Factory Zero has produced the first few Hummer EV units to be delivered to the customers.The automaker is investing about $30 billion for the production and development of electric vehicles through 2025.
By : HT Auto Desk
| Updated on: 19 Dec 2021, 10:35 AM 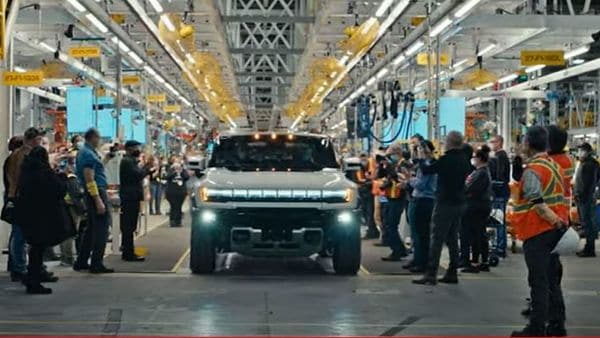 GMC Hummer electric pick up truck at the carmaker's Factory Zero (Source: Screengrab of a video posted by GMC on YouTube)

General Motors has started delivering its Hummer EV pickup to customers in a major step towards its goal to become a sustainable automaker. The pick-up truck is its first electric vehicle to be based on the Ultium platform, motors and batteries, all of which were developed in-house by the automaker.

General Motors' Factory Zero has produced the first few Hummer EV units to be delivered to the customers. And this is just the first lot of the automaker's Ultium-based electric vehicles, a platform which will underpin the company future electric vehicles as well.

GMC posted a video on Twitter showcasing the production of the Hummer EVs and the rolling out of the first unit for customer deliveries. The video message read, “The GMC HUMMER EV offers revolutionary capability and the ultimate performance to lead General Motors’ vision for all-electric future."

The automaker is investing about $30 billion for the production and development of electric vehicles such as the Hummer pickup and its upcoming SUV variant through 2025. The company also initiate the first customer deliveries of a new electric commercial delivery van to FedEx.

(Also read | Back in the game: GM to resume production of Bolt EVs from January next year)

GMC's first production Hummer EV was auctioned for $2.5 million at Barrett-Jackson with proceeds benefiting the Tunnel to Towers Foundation, an organization established to honor the memory of September 11 first responder Stephen Siller.

The company hasn't yet revealed how many reservations for Hummer EV have been received, of which a special Edition 1 version will be initially sold for about $113,000 before lower-priced versions enter production. The company had earlier announced that the reservations for the new Hummer are fully booked through the next year.

GMC Hummer EV is the second all-electric pickup truck to enter the market, following the R1T from EV start-up Rivian. These will be followed by Ford F-150 Lightning and Tesla Cybertruck.