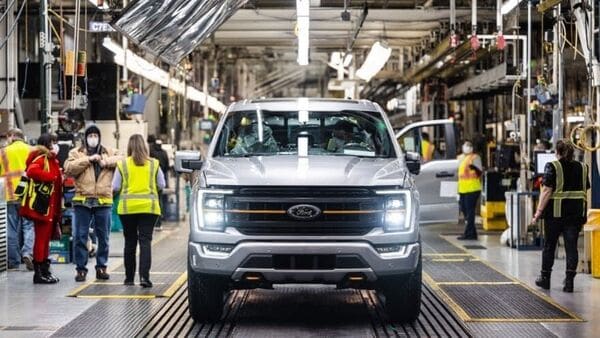 Ford announced that it will halt the production of its F-150 pickup truck at its Kansas City assembly factory for a week because of the ongoing global semiconductor shortage. The automaker's factory situated in Dearborn, Michigan, however, will continue to function as it is.

The F-150 pickup truck is one of Ford's top-selling models along with other large utility vehicles and vans. It contributes a significant chunk of profit to the automaker's global sales. Earlier this month, Ford had stated it move to pause some of its assembly plants in the week of February 14 due to the chip crisis.

Earlier this month, the US-based automaker announced its fourth-quarter sales that stood low as per the company's expectations. It attributed the poor sales to the supply chain issues while a few company executives shared some of the brand's suppliers were not able to deliver items due to the outbreak of the Omicron variant.

Ford's profit stood at $12,3 billion in the last quarter and that figure got a significant push from an $8.2 billion accounting gain from the automaker's investment in EV maker Rivian. It shared it is expecting full-year pretax profits in the current year to go up to 15 per cent to 25 per cent compared to last year. This will range somewhere between $11.5 billion to $12.5 billion.

A previous report has informed that the automaker to separate its EV business from its ICE vehicle business in the coming days. It has been reported that Ford CEO Jim Farley wants to differentiate its electric vehicle business to generate valuation like EV company Tesla. Ford may not split the company and might plan an internal rearrangement to create a separate EV unit. “We are focused on our Ford+ plan to transform the company and thrive in this new era of electric and connected vehicles. We have no plans to spin off our battery electric-vehicle business or our traditional ICE business," an email sent by Ford said.