Manufactured with scrap tyres, disc brakes, LED lights and handles of other bikes and carrier and the seat of bicycles, the inventor spent nearly ₹10,000 to develop the light motorcycle.
By : ANI
| Updated on: 16 Jun 2020, 21:00 PM 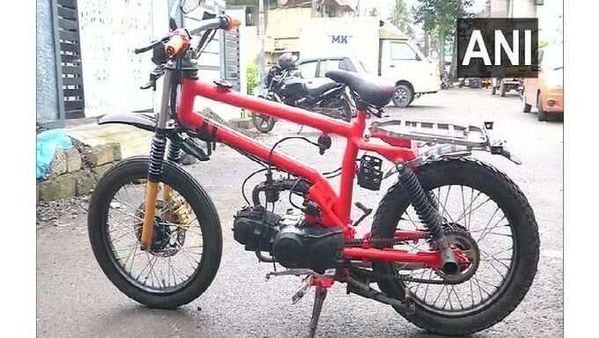 A 9th standard boy made the innovative 'light motorcycle' in one and a half months by putting together the scrap parts. Image Credits; ANI

A 9th standard student, Arshad TH, has developed a light motorcycle by using scrap materials from his father's automobile workshop in Kochi.

The son of TJ Hashim and Haseena, Arshad, hails from Palluruthy at Kochi and is a student of SDPY school at Palluruthy.

The boy made the innovative motorcycle in one and a half months by putting together the scrap parts.

(Also Read: This ET looking scooter flew off the shelves even before launch. Here's why)

The bike has a petrol tank attached to the seat and handles, with the capacity to hold one litre of fuel. Arshad claimed that the bike can travel up to 50 kilometres on a full tank. Manufactured with scrap tyres, disc brakes, LED lights and handles of other bikes and carrier and the seat of bicycles, the inventor spent nearly ₹10,000 to develop a light motorcycle.

''I first wanted to create a bike when I saw an iron pipe and engine of a motorbike in my father's workshop during the lockdown. At first, my father scolded me but halfway through the process he helped me and it got completed in one and a half month. It was made using the parts of many bikes. I wish to manufacture a trolley next," Arshad, told ANI here.

Meanwhile, Arshad's father said he was proud of his son's creation and added that he would support him in his future ventures.

(Also Read: This $100 driveable cardboard Ferrari from Vietnam is winning the internet)

''When he was at home during the lockdown, he asked me if he could make a bike which looks like a bicycle. My friend gave him a welding machine. I did not think it would look so good. He is also looking into getting registration. He says he wants to make a trolley next. I will support him as much as possible," Hashim said.