This $100 driveable cardboard Ferrari from Vietnam is winning the internet

This homemade cardboard Ferrari replica gets scissor doors, LED lights and runs on a motorcycle engine, all for just $100.
By : Prashant Singh
| Updated on: 03 May 2020, 04:24 PM 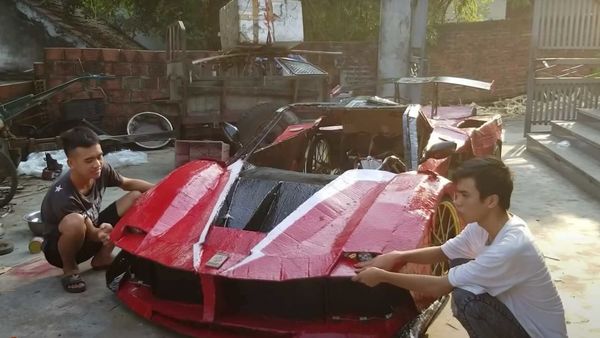 The carboard Ferrari runs on a motorcycle engine.

Supercars are expensive, but who said you can't make one in your home garage. While we have previously seen some home projects churned out using 3D printing machines, but this cardboard replica of a Ferrari FXX K Evo is what's trending on the internet these days.

This DIY Ferrari has been made by a group of three friends from Vietnam and the total costing of this project is reported to be just around $100.

With a cardboard structure it surely won't be able to pass any crash tests but the video below shows that it is actually functional and can be driven on-road.

Though there is no mechanical specs available but what's obvious is that the makers have used a low-capacity motorcycle engine fitted in a modified frame to support four wheels. Also, the video shows that there is no steering wheel but pulled-back motorcycle handlebar, and that pretty much clears the air.

Moreover, this cardboard Ferrari has been given LED headlights, tail lights, as well as rearview mirrors. The brand logo sits at the front/rear-fascia along with the 'Ferrari' branding over the sides. Best thing, it also gets scissor doors.

While these homemade project cars are surely not legal to be driven in India, but looks like it is otherwise in Vietnam. Whatever the case is, the makers do deserve appreciation for their creativity and 'Jugaad'.